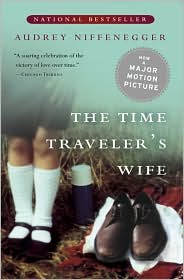 I'll say this for Audrey Niffenegger; she's got courage.

The Time Traveler's Wife, Niffenegger's novel about the relationship between a mortal woman and an involuntary time traveler, goes so far beyond clich? it circles back and heads into original territory. In concocting this book, Niffenegger clearly was not afraid of the difficulties inherent in fording into a topic as frequently visited as romance. Love, in Niffenegger's world, is not ironic, tainted, or sullied in any way. If there has been a book in recent memory that had the guts to treat love as something pure and lasting, even with all faults attendant, then I must have missed it.

The Time Traveler's Wife is nominally the story of Henry DeTamble, who is whipped back and forth throughout time with little provocation and no regard for convenience. Fate or something like it has bound him to Clare Abshire, who lives a normal linear life. Once Niffenegger has set up her premise and provided enough context to keep it from feeling sci-fi, though, she sets about telling a story about the difficulties of finding, and then staying in, love. The Time Traveler's Wife is straightforward at the same time it's intricate and convoluted; Henry and Clare's relationship has different complications than anyone else's, but supporting characters like Henry's ex-girlfriend Ingrid Carmichael and Clare's secret admirer Gomez show that even idealized love isn't free from complications. Niffenegger creates painfully sad scenes as easily as she does ones set in gauzily sunlit summer meadows (there are more than a few of those, by the way).

My gripes with this novel are few. This was Niffenegger's first novel, and her first-timer's cautiousness manifests itself in her description of her lead characters. Henry DeTamble is a punk-rock librarian and Clare Abshire is a wealthy, beautiful artist ? two entities so rare in the real world they border on absolute fiction, if you ask me. Niffenegger doesn't have the confidence to let the reader imagine their physical appearances for themselves, so she assures us over and over again that Henry cuts a “panther-like” Egon Schiele figure and Clare is a red-haired vision of Botticelli, clad in velvet dresses and pearls (clothes 20-year-old women do not wear, last time I checked).

I'm more than happy to give Niffenegger a few first-timer's blunders, though, because as a whole the book is a knockout. A blurb on the back of my copy describes The Time Traveler's Wife “as dazzlingly imaginative as it is dizzingly imaginative” and for once, that's not hyperbole.