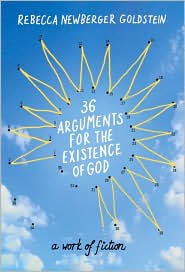 For a variety of reasons, I do not usually venture off the nonfiction path. I think the main reason is the ease to which I can find books that interest me. It is much easier for me to walk into a bookstore and go straight for a topic rather than pour through the massive fiction section. I often do not want to devote the time to research fiction authors that write about what interests me.

Knowing all of this about me, I maintain an open mind for recommendations. When Jodi had Rebecca Newberger Goldstein's 36 Arguments for the Existence of God sent to me, I did not hesitate to read it. Inside was a wonderful world of philosophy, psychology, religion, atheism, and academia. The book is about Cass Seltzer, a professor of religious psychology and author of the book?The Varieties of Religious Illusion. Goldstein shows us Cass' world through his academic formation with the eccentric genius Jonas Elijah Klapper, his family's Hasidic Jewish roots, and personal relationships with two women: the extremely mathematical psychologist Lucinda and the wild anthropologist Roz. The book's climax features Cass, oft-dubbed the atheist with a soul, debating the existence of God with economics professor Felix Fidley.

I believe my complete buy-in for this book has to do with the belief that I am somewhat like Cass. Though I am not an atheist, I do not tow the line of any one particular religion and am pretty freewheeling with my spirituality. Cass is not a hard-core atheist of the Richard Dawkins or Sam Harris schools. Instead, as a psychologist influenced by his roots in Hasidism, Cass sees how people can be religious or spiritual and would rather study and talk with them than dismiss them as crazies.

This excerpt from the debate nicely shows Seltzer's worldview.

Religious impulses and emotions are varied. There are expansive, life-affirming emotions that can find a natural expression in the context of religion, which is why I can never offer a wholesale condemnation of religion, even though Professor Fidley seems to think I do. But when religion encourages what I can only describe as a moral childishness that blocks the development of true moral thinking, then I do condemn it. When religious tells us that there is nothing more we can say about morality than that we can't see the reasons for it, but do it if you know what's good for you, then I do condemn it. We can do better than that. We can become moral grown-ups. And if there were a God, surely he would approve. (323)

One of the most interesting qualities about this book is the way Goldstein shows Cass' relationships with vibrant personalities. A particular relationship to note is the one with Lucinda, his girlfriend during most of the book. Cass and Lucinda's relationship involves, among other things, how two academic egos relate to one another. This exchange shows how these egos can often clash.

“Rational self-interest is always what morality boils down to,” she continued in a reflective tone of voice.

“Of course. I've always figured you must, too.”

“Well, isn't that basically the core of Jewish ethics?”

“I never thought of it that way.”

“The way I heard it, Judaism is the religion of rational actors. My father explained it to me. His grandfather was religious, so he knew all about it. The great rabbis had a saying: 'If I am not for myself, then who will be for me?'”

“I'm kidding, I'm kidding! Give me a little credit for complexity, will you! It was a joke!”

There is so much more that I could write about this book. It is easily the best fiction I have read in over a year, though I do not have much of a data set to pull from in making this claim.