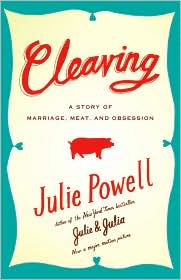 When we last saw that saucy Julie Powell, she was a sweaty rosacea mess of marrow-crusted fingernails and damn-near oozing butter from her pores at the finish line of a year-long Julia Child marathon fraught with self flagellation, hard liquor, and “Buffy the Vampire Slayer” quotations.

Cleaving: A Story of Marriage, Meat, and Obsession, is what happened after the book deal: More restlessness, in the key of the restlessness that prompted her first project-turned-blog-turned-book-into-movie Julie & Julia. Our spirited heroine is back — and she’s gotten naughty.

Julie has decided she wants to learn to be a butcher. She is absorbed into the staff at a hippie meat market in the Catskills. While Powell genuinely wants to learn the art of hacking through rib cages, and slicing pig cheeks, she also needs a distraction from that brain-worming sexual contortionist D — her not-so covert alternative to her husband Eric.

Oh, Eric knows all about this D character. The dynamic Powell duo has been together so long that they sometimes wake with the same song in their head, Julie says. Not to mention that he has seen the text messages and emails. And so Eric had taken on his own side project, albeit reluctantly. The madcap swingers continue about their normal lives, sometimes coming home, sometimes staying out all night, never really talking about things — things like how Julie likes it when D ties her up and smacks her around a bit.

By the time Julie ends up at Fleisher’s wielding a meat cleaver, D has broken things off again, won’t respond to her multiple and varied attempts at communication, and she is awash in passionate memories of the time she was tied to this or that, kissing in cabs, his smell, and other scenes from break-up montages.

Powell has two stories going on here, with opposite results:

1. There is a first-person journalistic account of learning how to be a butcher. This is amazingly visual and captivating. A mix of Susan Orlean-style reporting on a specialty or subculture that is made interesting by the way it is written more than, necessarily, the subject matter.

2. This is paired with doses of sloppy, overwrought puppy journal entries by someone who has obviously never skimmed He’s Just Not That Into You. This part is deeply confessional, like blog posts written in 2004 before people realized their bondage fantasies weren’t necessarily as anonymous as they had hoped.

Powell obviously knows how to write, but it’s also obvious that she learned to write at the school of blogger.com. She addresses the reader, inserts pop culture references — almost exclusively from “Buffy” — and sometimes slips in little conversational quips and ticks. (I know, right?)

In the latter part of the book, she goes on a meat pilgrimage to Argentina and Tanzania. She writes these colorful bits about drinking fresh animal blood, wearing jewelry made from skin, bits of fur still poking out of it. She watches slaughters and meets a man who thinks a beer and a cigarette is a fair trade for attempted rape and her Blackberry. It’s only when she goes back into her own head to her two loves that it unfavorably twiddles the uvula to induce gagging.

In post-publication interviews, Powell has indicated that she would like to try writing straight-up fiction. If her first two books are indication, she should do the exact opposite. Embedded journalism, told in third person: sheep herding, organic farming, riding with Hells Angels. She cannot be trusted to write fiction. It will be thinly-veiled. It will be flowery. It will be dated. It will have a wine bottle on the cover and lipstick-scrawl font. It will be a waste of her talents.