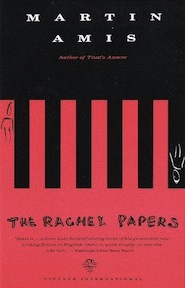 Charles Highway is a Rick Ocasek-looking, luggie horking, father-hating-for-unspecified-reasons, asthmatic on the cusp of his 20th birthday, which he is taking, like most things, very seriously.

He spends the hour leading up to midnight of the big day, which he refers to as the end of his youth, revisiting his relationship with Rachel. This is easy, as Charles Highway has kept detailed notes on their time together, all while simultaneously creating a personal guidebook called “Conquests and Techniques: A Synthesis.”

Martin Amis does this so well, creating a character so unlikable that if you met Charles Highway in real life you’d induce a brain spasm from over-using your eye rolling muscles. Amis takes that loathsome protagonist in his first novel,The Rachel Papers, and turns it all into a very witty story.

Charles is staying with his sister and her abusive husband while he prepares to apply for admission to Oxford. He’s got a girl, Gloria, who stops by for all sorts of floor routines, which are given play-by-play treatment. “What did I feel for her?” He wonders one morning. “Ambiguous lust, genial condescension, and gratitude. It didn’t seem enough.”

Charles meets Rachel by offending her at a party, taking her on a date, not calling her, and then giving it another go a week or so later. She’s a tough sell, with an American boyfriend always orbiting her. Charles plots ways to make headway: He visits a museum they plan to go to, plots profound statements he can say while standing near a certain window that delivers a specific light. He does the same with movies. He manufactures all sorts of tortured emotions, and soon enough he’s got her in his bed. More very detailed coupling follows, starting with the purchasing of protection.

Things with Rachel don’t last long. She becomes a bit too human for young Charles during a 10-day covert sleepover. (A girl’s gotta use the bathroom eventually, right?)

Not much happens in this short novel covering an equally short amount of time. It’s a lot of listening to the pretentious ramblings of a teenager who is trying to mold his life to look and sound certain ways. Certain books left open to certain pages, and the album on the front of the pile is deliberate. But every minute in Charles Highway’s head is shockingly ridiculous, although treated so seriously. Like a caricature who believes he is an illustration.