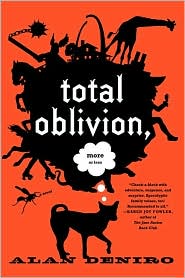 Total Oblivion, More or Less is a fantastical voyage down the Mississippi that would make Huck Finn and Tom Sawyer proud. The only difference with this trip is: there's no going home.

“There were tall white birches lining the eastern shore, their bark like an albino's skin. They seemed like trees from a different place ? but then I remembered that we were in a different place. And anyway, we'd never be going back to these birches. Few things from the journey would really be remembered. But maybe I would make a point of remembering the birches, because no one else would.” -pg 152-153

Cell phones, computers, universities, strip malls, and all modern conveniences are gone. The Mississippi River has become as deep as an ocean housing submarines, whales, and other deep sea aquatic life. The states no longer exist by the names we know and English is not the language spoken by all. On the shoreline roam giraffes, and horse-mounted warriors called Scythians who battle for power with the new leaders called the Empire.

Despite there not being an America anymore, the American spirit is strong with average-citizens-now-turned-refuges taking whatever is available and starting fresh. New professions and businesses emerge in cities that should be familiar, but are unrecognizable due to the plague that ravages society, the shifting environment, and various governments fighting for control.

I kept thinking, well, maybe all of this trouble will pass over, and electricity will start working again, and the Scythians will retreat to wherever they came from, and the Empire will give back their land, too, and people will be able to use their cars again and drive wherever they want to, and the government will find a cure for the plague, and we'll go back to St. Paul and I'll start my senior year, none the worse for wear.”
-pg 3

In this futuristic alternate-world, survival becomes a way of life for 16 year-old Macy. She gets pulled out of her average middle-class Minnesotan upbringing by a group of soldiers, put into a refugee camp, and finally escapes on a riverboat going south. Macy works to keep her family together and maintain normalcy, which she, more or less, succeeds at. We learn about the plague through flash-backs by Macy, and also scattered letters, news reports, and court documents. The reader, just like Macy, needs to stop struggling with the rules of this antic world, where even the timeline doesn't make sense. This lack of coherence is the biggest obstacle to the novel, but luckily it doesn't detract from the story.

Total Oblivion proves that life must move forward, even as society is collapsing. Though it could be perceived as a somber novel, it does delight the reader with ironic humor and unexpected plot twists. Author, Alan Deniro, takes an innovative look at apocalyptical times and the result is ethereal.