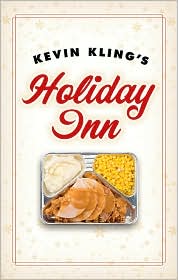 I saw Kevin Kling perform at the University of Minnesota Duluth less than a year ago. It was a spare set up, with just the storyteller with a microphone and an adorable accordion player accompanist who punctuated Kling’s stories on the squeeze box, all whimsy and raised eyebrows. Kling, a native Minnesotan, tells his tales with the breathlessness of a neighbor kid who can barely get his “and thens” out fast enough. Sometimes his stories are funny, sometimes they are hilarious, sometimes they are thinkers.

I spent the entire night with a goofy grin on my face.

A few of the stories he told that night are featured in Kling’s latest book Holiday Inn, a collection of round-the-calendar seasonal stories. Kling writes about traditional holidays like Christmas, Mother’s Day, and the Fourth of July, but he also tacks on regional holidays like Grandma’s Marathon in Duluth, ice fishing season, and the Minnesota State Fair. And then there is just some stuff for fun, like how he learned hobo law spontaneously riding the rails to Seattle with a buddy to settle a bet about whether inland seafood could compare to crustaceans on the coast.

This book by the storyteller, National Public Radio commentator, playwright and poet is a real charmer. Kling writes about the mundane and easy-to-relate-to stories like breath-holding competitions against his brother in church, or a dog that vacuums up an entire plate of oatmeal cookies in a single snort. His parent’s aggressive approach to hiding Easter eggs, and a neighbor who gave out special Halloween pickles.

Then Kling throws in the adventurous, like a train ride strapped to an open flatbed, through a tunnel in the mountains, or wandering around in Australia or Scotland.

And then there are the “I know a guy who” stories, Minnesota-specific urban legends, including one where a man is ice fishing and catches a license plate. He looks at it, realizes it is his license plate, runs out of the fish house and sees his truck has gone through the ice.

Kling’s stories are folksy — in a good way — and he has obvious affection for the dozens of characters he includes, especially his brother Steve. This clean collection of 21 stories doesn’t dig super deep, but it is written the way the stories would be told. And above all else, Kling is a storyteller: There are parts of Holiday Inn where his? voice is so clear that it is more like listening to him on a Walkman than reading words on a page.