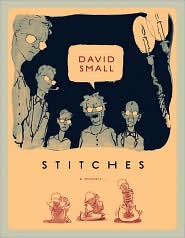 It’s not a good idea to write a review of a book when your eyes are still wet with the tears it caused you to shed. So I waited an entire day to see if the raw emotion evoked by David Small’s graphic memoir Stitches would abate a little before I told you about this book.

I had to wait two days.

Holy shit does this book pack an emotional punch. It’s the first buzzed about graphic novel that actually surpassed the hype (see Asterios Polyp and Watchmen for the disappointments).

In Stitches David Small shows and tells us what it was like to grow up in his family. Ruled by an angry, unhappy mother who communicates in slammed cupboards, coughs, and silence. A father who is a radiologist and subjects young, sickly David to all kinds of radiation treatments in order to clear up some sinus problems. And an older brother who takes out all the stress of living with this family on his drums.

David grows up an imaginative, subdued kid with who walks with a hunch, as though the burden of the dysfunction and abuse is just too much for him to bear. He loves Alice in Wonderland and often parades around the neighborhood sporting a yellow towel reminiscent of Alice’s hair.

When David’s 11, one of his dad’s doctor friends notices a growth on David’s neck. The friend advises them to get it checked out, but they wait claiming there isn’t enough money. Meanwhile, David’s parents buy new cars, furniture, and a host of material goods. It isn’t until he’s 14 that they finally get the growth checked out. It’s cancer. Only they never tell David that. They don’t even tell him after he lives through two operations, and awakens to find a railroad of stitches leading from his ear to his collarbone. When he awakens after having a vocal chord removed and his voice is gone.

This story is so sad and so tragic, and yet somehow beauty can be found in the emotional honesty with which Small renders his story. We learn about his family’s history his crazy grandma, his mother’s secrets, and while it does not excuse their abuse it does make it understandable.

Small illustrates his harrowing story beautifully, the drawings are a watery, smokey gray infused with tension and fear — adults are masked behind opaque glasses, anger rendered in the two lines of a furrowed brow.

I can’t say that I actually enjoyed reading Stitches. It’s not a pleasurable experience, no. Reading it made me so sad, which sounds kind of weak. But there you have it. The book is sad and tragic, and heartbreaking. Some of it hits a little too close to home and the idea that Small experienced it too and rendered it so perfectly literally takes my breath away.

Even now as I write about the book, my eyes fill up with tears. Oh, who am I kidding, I’m bawling my head off here. I’m going to believe it’s because what Small has done is turned tragedy into beauty and that is something joyful and wonderful and worth crying about.