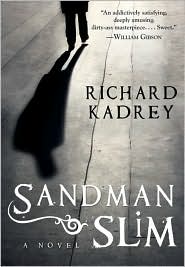 Stark is back from Hell and he’s pissed. After eleven years in Hell, or as he calls it, “Downtown,” where being the only living human to ever enter Hell subjected him to gladiator-style fights with monsters, Stark is out to kill his magic friends, the “Circle,” who sent him Downtown and murdered his girlfriend.

Getting out of Hell with the help of a magic key stored in his chest (yes, IN his chest), Stark, the dark anti-hero in Richard Kadrey’s Sandman Slim, comes back to L.A. with newfound magic and an eerie way of living through any kind of assault. Gunshots, fireballs, a magic sword-like apparatus, and other attacks actually make him stronger and immune to those same attacks a second time. Stark is practically unstoppable, but so are some of the members of the Circle, which leads to awesome fight scenes.

Don’t think this is all about tracking down the Circle, though. With a fuck-you attitude, Stark runs into trouble with Nazi youth, Homeland Security (and they know about magic, who knew?), and demons, making him an almost-celebrity amongst the angels who nicknamed him Sandman Slim. Yes, there are angels in the book, and demons, and monsters, and even Lucifer.

I usually don’t find the revenge novel very intriguing, but this one was so entertaining. While there weren’t that many surprises for me, Stark is an interesting character to follow. The story is told by him so we see what he sees and know what he’s thinking. He has a dark, biting sense of humor, and his one-track focus on finding the Circle gets him in trouble, and it’s always fun hearing of someone’s troubles. Just turn on the television, every channel can’t stop talking about Tiger Woods, and admit it, you secretly love it.

My only negative with Sandman Slim is that sometimes Stark sounds like a whiny teenager who doesn’t get his way – “You’re not doing what I want, fuck you, I don’t need you anyway.” Some of the long, drawn out, everyone-screws-me-over speeches were a bit much, too, but who can blame the guy. His friends sent him to Hell where he was subjected to torture. I suppose he has a right to be bitter.

I could picture everything in Sandman Slim so vividly that I hope someone takes this and turns it into a graphic novel because I want to see what they draw. This really is like a mix of a dark graphic novel and the movies “Gladiator” and “Kill Bill.” All out vengeance from a beast that’s unstoppable. Completely entertaining.