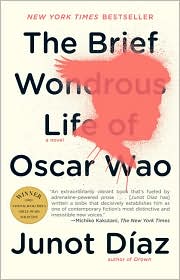 Near as I can tell, I stopped reading Junot Diaz’s The Brief and Wondrous Life of Oscar Wao sometime around Tuesday, May 8, 2007. I know this because when I cracked open the book a few weeks ago, a ticket stub for an Elvis Costello concert fell out.

I stopped reading because the buzz for Diaz’s much-anticipated first novel was exploding all over the place. See, it’d been ten years since the publication of his short story collection Drown which is nothing short of fan-fucking-tastic. The buzz for Oscar Wao was big, and buzz scares the shit out of me.

Generally you can’t win with a buzz book. Either you’re a contrarian naysayer who doesn’t like anything “popular” or you’re just another pathetic hipster following the heard. As a reader the buzz paralyzes me because while I’m trying to read the book I continue to have an internal debate with the buzzmakers. It’s a mess, so I just generally avoid the buzz book until all has died down (this explains why I have yet to get past page nine of Lorrie Moore’s A Gate at the Stairs).

Like some sort of Christian, virgin-until-her-wedding-day bride who just got laid for the first time, I’m so glad I waited. It means more that way. Being able to just read Diaz’s book without the buzz in the back of my brain allowed me to focus on this magnificent feat of a book.

Oscar is a tragic, obese, Dominican nerd who grows up in New Jersey with dreams of becoming the next Tolkien. He lives with his strict mother Beli, and his beautiful sister, Lola. The story of the Oscar and his family is narrated by Yunior the sometime college-roommate of Oscar and on again off again boyfriend of the lovely Lola. Yunior goes into the De Leon-family history to explain how back in the day they were struck with a fuku, a Dominican curse of doom that infects the family for three generations. Along the way we learn a lot about the history of the Dominican Republic that is told so well that if anyone else in my life had made history half as interesting I’d be a lot smarter than I am now.

There is no amount of praise I could heap on this novel to even come close to how good it is. Junot Diaz is amazing in how he blends nerd culture (think science fiction, anime, and comic books) with Latin American history and the supernatural/mythological.

The story is huge but when boiled down to its essence, The Brief and Wondrous Life of Oscar Wao is a story about a chubby nerd looking for love and hoping he’ll get laid. Oscar’s quest for love is heartbreaking and funny at the same time. Poor, poor Oscar.

Like I said, i can’t heap enough praise onto this book. What I can say, which should demonstrate the depth of my affection, is that after reading Oscar Wao I kind of wished I’d finished that wretched, wretched Watchmenn.