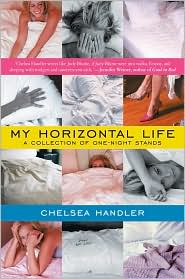 David Sedaris still holds the title of Best Comedy Writer in my mind, but after reading My Horizontal Life, I've decided Chelsea Handler is making a pretty strong bid to be the heir to that throne.

In My Horizontal Life, the unapologetically (almost proudly) promiscuous Handler recalls her many one-night stands with a tart, dry sense of humor. Her lack of regret or moralizing is refreshing; there are no wistful “what ifs” here, no tears shed at past misconduct. One gets the idea that, if Handler could do it all over, she would go ahead and make the same mistakes again. If she didn't get drunk and fool around with that midget, for instance, then how would she know midgets are best appreciated from afar?

The stand-outs here are “Overboard,” in which she goes on a Cruise from Hell with her 28-year-old virgin roommate (affectionately ? or perhaps not ? known as Dumb Dumb) and ends up bedding the 18-year-old star of the cruise's floor show, and “Out of the Closet,” in which she subversively punishes her gay friend Nathan by being the worst beard ever at his class reunion.

My only gripe is that Handler is internally inconsistent ? in one chapter she says she hates something, and then contradicts herself two chapters later ? and leans a little too heavily in certain jokes (like making fun of Michael Bolton, to whom she made reference at least three times). But who cares? I still laughed out loud so often while I was reading this that people in the coffee shop where I was sitting gave me funny looks and moved a few tables away.