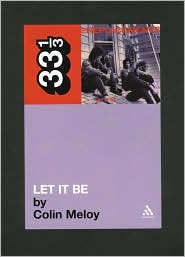 Colin Meloy’s greeting-card sized contribution to the 33 1/3 project, Let It Be is more of a music memoir for the Decemberists’ singer/songwriter/guitar player. Briefly: The series asks contributors to write about an influential album. From what I’ve gathered, Meloy took great liberties with the task — more than most — writing about the Replacements within the larger context of what it meant, music-wise, to grow up in the 1980s.

So. What was it like being Colin Meloy in the 80s: Hand-me-down TDK tapes from his super-cool uncle, playing broom-guitar, combing MTV’s 120 Minutes for new music, the “college rock” genre, staring at album covers, those clunky plastic CD holders in music stores, going to see the Nylons in concert just because it was live music and it was in his own town. Namely Meloy’s story is very similar to what it was like to be me — and probably you, and you, and you — in the 80s.

Meloy’s story is so fun, so familiar, and peppered with references to Depeche Mode, the Smiths, XTC, Jesus and Mary Chain. Even Wham! gets a nod, as does Chicago. Doc Martens, tapered jeans, and a feeling that he might be considered a poser.

Meloy doesn’t completely dismiss the reason for this book. He writes that he learned about the Replacements from his uncle, and takes such pride in following the band that when his uncle calls, Meloy just happens to be playing one of their records in the background.

“Listening to the Replacements, huh?” he said.
“Oh,” I said absently, as if trying to recall what I had put on the stereo. “Yeah. I guess I am.”

I learned about the Replacements doing a similar late Sunday night cram fest with MTV, and the song was “I’ll Be You,” which I loved loved loved. But rather than backtrack to older stuff at that time, I abused that one single, and got all hopped up on Paul Westerberg’s “14 Songs” a few years later.

And as for the Decemberists, I can’t say I could name a lick of what they’ve done. I do like Colin Meloy’s Morrissey covers, though, big time.

So I guess, to me, it didn’t matter who was writing about what band. It just turned out to be a fun little jaunt through a mutual music memory lane.