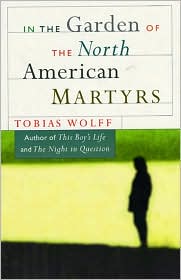 I once read a review of a movie version of Anna Karenina that compared viewing the film to “watching beautiful animals moving behind thickly frosted glass.” At the time I wasn't sure what that meant, but now, after reading Tobias Wolff's In the Garden of the North American Martyrs, I think I have a better idea.

The twelve short stories in this collection are puzzling in the way good short stories should be puzzling. By that I mean after finishing each one, I had to set the book down for a minute and ask myself what had just happened. The unifying theme here seems to be characters realizing they lack passion, or else finding their passion belatedly, in such a personal way that it isn't readily apparent to the reader what exactly transpired over the past five or so pages. In “Next Door,” for instance, a man (apparently an old one, given his vocabulary) and his wife fume over how their neighbors' domestic squabbling keeps them awake at night. Without warning, the story ends with the man's strange vision of a vaguely apocalyptic heaven:

At the end, we see the explorers sleeping in a meadow filled with white flowers. The blossoms are wet with dew and stick to their bodies, petals of columbine, clematis, blazing start, baby's breath, larkspur, iris, rue ? covering them completely, turning them white so that you cannot tell one from another, man from woman, woman from man. The sun comes up. They stand and raise their arms, like white trees in a land where no has ever been.” (p. 8).

Now I don't have my MFA or anything, but my guess is that the man has become jealous of how vibrant his neighbors' relationship is. Even if it is violent at times, it beats how he sleeps in a separate bed from his wife and considers watching the Johnny Carson show entertainment. But then again, I could be completely wrong. I have no idea, and that's the tradeoff here.

Wolff's short stories are strange and mysterious ? if I were to compare them to a tasting a flavor that's familiar but hard to identify, I don't think I'd be getting too poetic on you ? but there is no immediacy. Whatever Wolff wanted his reader to feel, it doesn't come quickly. I also doubt there's any universality. I had to turn each story over in my mind before I made sense of it, and that's just it. I was making sense of it, which is not the same thing as receiving the message that was intended. Whatever understanding I've reached for each story, it's my own. I doubt anyone else who read it would arrive at the same conclusion.

That's why I now understand the strange visual of beautiful animals moving behind frosted glass. I can tell something powerful and skillful is at work in In the Garden of the North American Martyrs. I just don't know quite what it is.