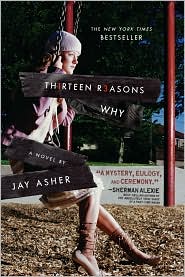 Long ago we called this sort of thing an After School Special — television programs that featured timely topics and life lessons for a school-aged audience. Titles included: “What if I’m Gay?,” “Please Don’t Hit Me, Mom,” and “My Dad Lives In A Downtown Motel.” But they were cooled-up with familiar teen faces: The teen alcoholic hockey player in “The Boy Who Drank Too Much” was Scott Baio. Helen Hunt, Malcolm Jamal Warner, Mary from “Little House on the Prairie” all did time. The stories were grainy, the stars had feathered hair, straight-leg jeans, and clunky tennis shoes. In the final moments of an episode, a young boy’s blue collar father would realize that he was proud of his son, the ballet dancer.

Jay Asher’s pulls out the print edition of the ASS in his piece of young adult fiction 13 Reasons Why.

Clay, a nice kid, a candidate for Valedictorian even, receives in the mail seven cassette tapes, the sides numbered 1-13 with nail polish. They are an elaborate suicide note from Hannah, a girl who recently died after chugging a bunch of pills.

Hannah spends one side of each tape talking about a person who played a role in her decision to end it all: the older boy she kissed in the park whose funhouse version of events had a scene where Hannah let him get to second base; A new student who sends around a “Best/Worst” list that has Hannah reigning at “Best ass in the freshman class”; the peeping Tom classmate who made it impossible for Hannah to fall asleep watching the stars and lightning now that she had to close the shades in her bedroom.

The tapes come with rules: All 13 people must listen to them, then pass them on to the next person. If anyone bucks the system, Hannah has an anonymous person in place, who will make these tapes public to the entire school. The hallways will flood with some meaty, meaty gossip.

Hannah also provides a walking tour, a map so that recipients of the tapes can see where she used to go to drink hot chocolate and write poetry, or the stop sign her friend took out while drunk driving.

Clay spends the day listening to the tapes, thinking about Hannah, being over-overwrought, participating in the walking tour, and wondering what the hell he did to end up on this list.

The moral here: Be nice to people. Don’t talk about their ass. Certainly don’t touch it without asking.

This book is a big drama, with Clay retching into the bushes and falling more and more in love with Hannah, with each B-side. Is it good? Hard to say objectively. I thought the Clay character was pretty one dimensional in all his goody-nice-guy-no-groping glory. And I thought Hannah’s reasoning skills could use some sharpening. Instead of being a case study of one girl’s spiral into depression, the entire plot is shallow — more like a teenager’s emo fantasy. “I’m gonna, like, kill myself. That’ll show ’em. . . . I wonder who would cry at my funeral?”