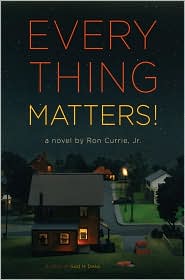 Even before he’s born, Junior is told exactly when the world is gonna end. He’s told, in utero that the world will end June 15, 2010 when he is just 36 years old after a giant comet smashes into Earth and obliterates life on the planet.

That’s how Everything Matters! by Ron Currie, Jr. opens and it just gets better from there. It starts with this unknown, omniscient “we” telling Junior all about the future and his family. Then we jump into sections narrated by Junior’s mom, dad, and older brother. Here we learn of the mom’s horrific childhood and how anxiety-ridden she is, the dad’s time in Vietnam and how he gave up playing pro-baseball to fight eventually losing part of his finger to prostitute; and his older brother who becomes an adolescent cokehead because he can’t cope with the birth of Junior.

Junior grows up to be a freakishly smart kid who is prone to anxiety. He carries his secret with him, until he falls in love and tells his girlfriend who has a peculiar dislike of “crazy people” what he knows. Things get pretty bad for Junior and he spends a good portion of the limited time on earth in a drunken haze with less than savory characters.

For the most part this fantastical tale about the apocalypse is damn entertaining it veers off a bit in the third act with a sort of 24esque terrorism plot twist which would make Jack Bauer proud and then there’s that whole thing with Junior finding a cure for cancer. In a book that asks the reader to suspend quite a bit of belief, it has it’s eyebrow raising “really? really?” moments.

Despite that, Everything Matters! is really thought-provoking and oftentimes I’d find myself having to put the book down just to think. I won’t give too much away but Junior fights pretty hard to save a few characters and despite his efforts they die anyway. Makes a reader ponder things like free will, fate, and determinism. Big things for a book.

Even though a lot of Junior and his family’s antics border on farcical, and the main theme of the novel is impending doom, there is such a thread of hope that flows through the pages it very nearly takes your breath away. Or, if you’re kind of a crybaby like me, brings tears to your eyes. There’s a paragraph at the end of the novel that makes me cry every time I read it. It’s one of those paragraphs that will inspire the faithless and probably enrage the faithful. See what I mean by thought-provoking?

While this might be a sort of philosophical spoiler, it doesn’t reveal anything about the story, really. So reader beware:

Everything matters not in spite of the end of you and all that you love, but because of it. everything all you’ve got — your wife’s lips, your daughter’s eyes, your brother’s heart, your father’s bones and your own grief — and after Everything is nothing. So you were wise to welcome Everything, the good and bad alike, and cling to it all. Gather it in. Seek the meaning in sorrow and don’t ever ever turn away, not once, from here until the end. Because it is all the same, it is all unfathomable, and it is all infinitely preferable to the one dreadful alternative.