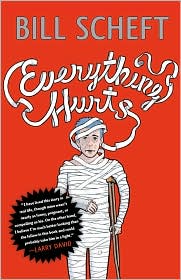 Bill Scheft doesn't need me to tell you how funny his book is. Larry David has a blurb on the front cover. Larry fucking David (Curb Your Enthusiasm, Seinfeld). Also, Lewis Black (The Daily Show) weighs in with a blurb on the back. Which makes me wonder if 50-year old white comedians from New York only associate with and appeal to other 50-year old white comedians from New York. Not that Bill Scheft cares what a chubby mid-western housewife thinks of his book, I'm too young and too female and too land locked.

That said, Scheft is a funny guy. He writes for David Letterman for crying out loud. Five nights a week people laugh at something Bill Scheft wrote of thought up. So really, this review should be in a top ten format. But I'm not that clever.

First off, let me say that I did not seek this book out. It was sent to Bookclub Bitches. So out there, someone ? no names ? thought a podunk, inconsistent, podcast called Bookclub BITCHES would be a good idea. I can easily think of a Top Ten list about the stupidity of that, but I digress. Mr. Scheft has won humor awards for Everything Hurts and like I said, Larry David loved it. So does it really matter if the book appeals to the masses? It should, but sadly Scheft ensconces his characters and story so far into 50-year-old white guy humor and saturates it with being set in New York, that it was hard for me to just sit back and see where it would all go. My Minnesota Nice compelled me to keep an open mind and trudge through.

The story of Everything Hurts centers around Phil Camp, a late forty-ish “writer,” who is plagued by chronic pain. I say “writer” because Phil has an alter ego named Marty Fleck, and it is Fleck who has written a spoof self-help best seller and it is Fleck who has a syndicated column in national newspapers. Phil Camp is just a divorced schlub who needs to pay the bills; Marty Fleck is the celebrity. But Phil develops a limp for which there is no physical or medical explanation. Thus begins Phil Camp's journey inward to discover the “root” of his pain. Sounds good right? But surprisingly that is not really what the book is about, that's just the set-up. The book is really about Phil Camp's relationship with his half-brother; a Rush Limbaugh-esque shock jock named Jim McManus. And Jim McManus hates Marty Fleck, hates him the way Bill O'Reily hates Keith Olbermann. But remember, Marty Fleck isn't real.

During Phil's journey inward he too easily falls for the doctor's daughter even though she's a cracker-jack of a gal. He also takes his time in confronting his brother, The Jim McManus, about an early childhood incident/trauma. And by the time we get to said trauma Phil is spiraling into whiny victimization. Buck up Phil, everyone's older brother is a shit ? literally and figuratively. It might seem like I'm over simplifying here, but it was hard to buy Phil's and Marty's sharp wit and pluckiness when Scheft so easily makes them crumble from a childhood bully story, chronic pain or not.

It seems that much of the story is moved ahead by a big set-up and then a killer joke. Which is funny and works night after night on Letterman, but I don't feel that it's enough to sustain an entire novel. Yes, Scheft is a funny guy and he makes Phil and Marty funny guys, but we all know how annoying comedians can be in large doses.

The one part of the story, that rang true in voice and situation was a hilarious “date” between Phil Camp and his 16 year-old neighbor Elle Vogelbaum. Elle types and edits when Phil writes as Marty since Phil's pain keeps him flat on his back most of the time. Elle makes Phil take her to The Four Seasons hotel (which is really clich?, even for New York). Scheft writes Elle sharp and smart and when Elle suckers Phil into taking her to her injured boyfriend's house, the writing and story are so sweet and natural it seems to come from a completely different book. Phil is without his “humor as defense” shield and is genuinely touched at Elle's love for the boyfriend and his own similarities to the injury and its effects. Maybe this chapter rings true, because it's not so closely based on Scheft's own life and his own struggles with chronic pain. It seems fiction rather than a loose memoir wrapped in genre of a novel.

The story climaxes in a farewell dinner for Marty Fleck, hosted my The Jim McManus. And even though The Jim McManus hates Marty Fleck, he does indeed love his brother Phil Camp. Scheft admits that the whole dinner scene was a way to get all the characters in one place at the same time, but Scheft also uses the dinner scene for his best comedic material, not delivered by his main character, but delivered by The Jim McManus. Which makes me think everyone in New York is just SO hilarious and witty and no one ever says or does one dumb thing, EVER. After so many one-liners, it's hard to stay interested, but easy to keep laughing.