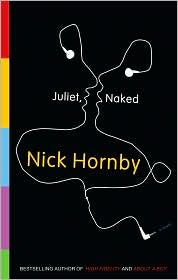 Nick Hornby is at his best when he writes about music. He has that inexplicable ability to convey what music means in a way that seems incredibly personal to him and yet universal at the same time. He’s so good when he writes about music that it often seems like he’s the first one to express that thought in such a wonderful way. He’s not so good at writing about relationships, which is why Juliet, Naked is about 50% great, 50% total crap, and 100% frustrating.

First of all, if this book were written by Nicolette Hornby it’d have a pink cover and there’d be some shoes and probably a shopping bag featured prominently. This is what I like to call “dick lit” which is really just chick lit written by a man. Instead of being about shopping, fucked up women who want a man, and the men they chase, it's about rock & roll, fucked up men with commitment problems, and the women who want them despite all that.

So yeah, I’ve basically just summed up the plot of Juliet, Naked for you. If the book were just that, I’d say avoid it like the plague. But then there’s the music, the rock and roll that Hornby does so well. Even better this is rock and roll on the Internet! As the proprietor of a Paul Westerberg fansite I have to say this book often hit a little too close to home for comfort.

Duncan, one of the main characters, is an expert on the reclusive 80s rock & roller Tucker Crowe. He’s a big deal expert on Crowe on the Internet. Duncan who lives in a small town on the English seaside even makes a pilgrimage to the US to tour some famous Crowe sites — the Minneapolis bathroom where Crowe decided to walk away from his career, the site of the Memphis recording studio where Crowe recorded his famous record (Juliet), etc. (if you’re a Westerberg or Replacements fan, some of this is probably making you uncomfortable too). Duncan drags his girlfriend Annie along on the journey. Once they return home Annie realizes she’s wasted fifteen years of her life and all her prime babymaking years with Duncan. Nobody’s happy.

Then a mysterious CD arrives in the mail, Juliet, Naked. It’s a stripped down acoustic version of Crowe’s seminal album. Annie listens to it before Duncan and thus the demise of their relationship begins. They write dueling reviews on the website — Duncan praising and Annie dissing. This leads to Annie getting an e-mail from the mysterious Tucker Crowe. The story then proceeds exactly as you would expect it to. Is it original? Not in the least. Plus, the cast of characters is pretty deplorable.

Duncan is a self-involved, pompous asshole. Annie is a baby-hungry woman who needs to jump into a new relationship about 10 seconds after ending her last relationship. And Tucker is a woe-is-me, I’m too damaged to be loved whiner. Not a likable crew.

And yet, somehow, reading this book is not a hellacious experience. While I was reading it I didn’t want to poke my eyes out, except for when Hornby introduces another unnecessary character and gives us more background on the bit player than we really need. Coming in at over 400 pages Juliet, Naked could have done without a few of those needless characters.

What saves this is Hornby’s brilliant music writing. Take this morsel of deliciousness for instance:

The first time Duncan had watched his computer fill in the track names of the CD he’d put into it, he simply didn’t believe it. It was as if he were watching a magician who actually possessed magic powers: there was no point in looking for the explanation, for the trick, because there wasn’t one — or rather, there wasn’t one that he’d ever understand. Shortly after that, people from the message board started sending him songs attached to e-mails, and that was every bit as mysterious, because it meant that recorded music wasn’t, as he’d previously always understood, a thing at all — a CD, a piece of plastic, a spool of tape. You could reduce it to its essence, and its essence was literally intangible. This made music better, more beautiful, more mysterious, as far as he was concerned. People who knew of his relationship with Tucker expected him to be a vinyl nostalgic, but the new technology had made passions more romantic, not less.

And there is just enough of this kind of writing that saves Juliet, Naked from being a predictable, pointless waste of time.