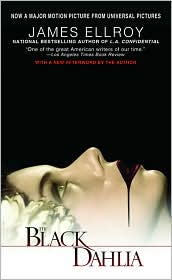 Bucky Bleichert and Lee Blanchert are boxers turned coppers who have recently forged a friendship and partnership after kicking the shit out of each other in a highly-publicized, post-retirement boxing match that resulted in huge headlines, cash for the LAPD, and a promotion for Bucky in James Ellroy’s fictional take on a true crime, The Black Dahlia.

They are on the job when the Black Dahlia’s body is found in a vacant lot around the corner on 39th and Norton. The torso is severed, and her face has been sliced ear to ear — mafia style. The body has been drained of blood, and the organs removed.

Lee goes from zero to nutso, using the case as a way to resolve the murder of his own sister. Bucky does everything possible to get out of working the case, and instead spends his time trying to undo the crazy his partner is unleashing. At the center of this is Kay, Lee’s special lady who is also making bedroom eyes at Bucky.

A frenzied, hopped up Lee goes missing. Bucky chases him to Mexico. Meanwhile, no one is closer to solving the case. In Lee’s absence, Bucky catches Black Dahlia fever, and follows a lead involving a Black Dahlia lookalike with a prominent father. This leads to loads of deviant sexual situations, crooked coppers, and more twists than a bag of licorice.

The Black Dahlia is based on a true story of the? still-unsolved murder of Elizabeth Short, an East Coast girl and wannabe actress who got mixed up in her own lies and too many boys. It is filled with 1940s-style race relations, politics, and guys guys. It’s the kind of noir crime novel where the lingo leads a character to say something like: “Then you’ll top out your twenty rousting [racist term favored by Mark Twain] piss bums. Or hasn’t anyone told you that cops who take things personal end up from the hunger?”

Ellroy solves the crime in his own way, but getting there involves sifting through dozens of characters and threads and dead ends. It’s a good solid mess of thick personalities and plot and a seedy glance at post-war Los Angeles.