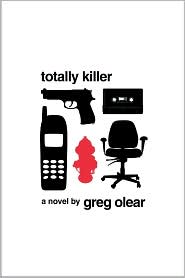 I picked up Totally Killer by Greg Olear because of the cassette on the cover, which I spied on his Largehearted Boy Book Notes essay. There’s something in my genetic makeup that makes it nearly impossible for me to pass up any book with a cassette tape on the cover. Somewhere buried deep in my subconscious is the girl who spend all Sunday taping her favorite songs off America’s Top 40 countdown, and apparently she’s the on in charge of book selections.

I stuck with the book despite my extreme annoyance because it’s the November pick for Rock & Roll Bookclub.

As a reader, I rarely question an author’s Point of View (POV) choices. I figure it’s their story they can tell it how they want to. However, this is not the case with Totally Killer. In fact, I spent the first half of the book so annoyed by Olear’s POV choice that I nearly abandoned it. I’m kind of glad that I didn’t.

Totally Killer, set in New York in 1991, tells the story of the last few months of Taylor Schmidt’s life as told by her roommate Todd. We know from the beginning that Taylor is dead. Ostensibly, Todd is retelling Taylor’s story based on her diaries. Diaries he read in 1991 when they were roommates.

The novel is told like a close third person, Taylor’s point of view with random first person interjections from Todd. It is distracting at best, bullshit at worst. To truly enjoy the first part of this novel you have to believe that Todd has a photographic memory and that Taylor kept the most detailed diaries in the history of diary-writing. Todd often mentions that he no longer has the diaries (the reason is made clear in the end). At one point, very late in the book, Todd tells us he is making up the next little bit because it wasn’t written about in Taylor’s diaries. If we had such a disclaimer at the beginning of the book, it would have been a much easier read. Sadly, we’re supposed to buy the whole ‘recalling from memory/diary entries’ crap.

It’s tough to swallow, and I couldn’t do it. The POV drove me nuts. It’s an odd choice and while I gotta hand it to Olear for making a different choice, the writing often got in the way of the story. It doesn’t help that the POV would randomly shift into minor characters for a paragraph (or two) and then slip back into the Todd/Taylor POV.

This is the dominant POV in the first half of the novel, with Todd telling us Taylor’s story (Midwestern college girl, come to the city, can’t find a job, and she has the kind of sexiness that drives men wild), and interjecting his random opinions and pop culture knowledge so we are consistently reminded the story takes place in 1991.

The first half of the book chronicles the trouble Taylor has finding a job in the stagnant 1991 economy and how she happens upon a mysterious employment agency, Quid Pro Quo (the name is subtle as a jackhammer). This place is unreal with swanky, decadent offices in Manhattan, and it offers 20something, Gen-X job hunters their dream job for a hefty price. Not only do you have to give them twenty-percent of your yearly salary as a finders fee, you have to kill a babyboomer too. There’s a lot of anti-babyboomerism going on here and it’s pretty funny.

Taylor lands a job as an editor at a publishing house that pumps out murder-mysteries, and things start to go a little weird when she has to pay the piper. There’s a lot of intrigue and murder and mystery men and women.

The second half of the novel is infinitely better than the first half, mostly because we spend a lot of time in Todd’s POV. It’s much more interesting and the writing is less distracting. Here the story gets cooking and it’s fun. There are all kind of babyboomer conspiracy theories and cameos by Dick Cheney, Osama Bin Laden, and Robert Maxwell. The ending is one of those that either wraps everything in a nice bow, or blows apart everything you thought you knew. It’s kind of delicious and makes me glad I persevered through the annoying first half of the book.

In many ways, Totally Killer feels like a tender, love-filled homage to Bret Easton Ellis’ American Psycho. If you like that one (I didn’t), you’ll totally dig this one.