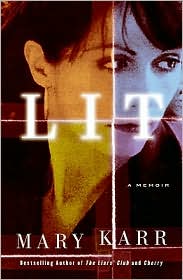 Mary Karr’s third memoir Lit is her own personal VH1 Behind the Music-style story, picking up the tale around where Cherry ended and stumbling into the place where The Liars Club became something Karr could sign in bookstores for fans waiting in a line that winds around the block. It’s all the stuff that happened after adolescence, seeping into the part where she committed her tumultuous upbringing to paper.

First she has to shake the drink.

Early scenes of Lit find Karr perched on a back porch, a drink in one hand, a baby monitor in the other, simmering in a boozy stew of self-loathing. She didn’t want to drink this much, or maybe she had even vowed to quit that day.

She’s gone from East Texas to California, to a college she cutely calls Lackluster located in St. Paul. There she develops an electric response to writing poetry, and makes the sort of friends who encourage her, lend her things, offer to adopt her, and otherwise keep her pointed north.

Fun fact: At one point Karr is named Poet In Residence of Minneapolis, which she calls “the most dubious post I ever held.”

Karr marries another poet with Ivy League roots who was born into a lawyerly legacy and a home that has more than one wing. They maintain a boho lifestyle in the early parts of their marriage. Karr bridges the gaps in their upbringing by being smart, spinning a great yarn, and being interested in literature.

Their relationship goes off the rails around the time their son — Dev, at least the III — is born. Karr’s husband, whom she provides with the fictitious name Warren Whitbread, is busy with work and school; Karr is planting satellite booze reservoirs in laundry baskets and in closets. When the “I want to kill myself” impulses get too heavy, she is admitted into a posh “Mental Marriott” as she calls it, to begin healing.

God-pushers are the bonus gift that come with Alcoholics Anonymous, and at first Karr pushes back. But when she begins dabbling in prayer, she experiences situations that she believes are sort of mini miracles that? strengthen her conversion. She receives a grant; An agent damn-near begs her for the book proposal that will eventually become The Liars Club. After cross examining a priest dozens of times, Karr commits to the Catholic church. You can imagine how cool this is among the writerly types she runs with. Karr receives a note from a friend in the biz: “Not you on the pope’s team. Say it ain’t so.”

I wish I was a big enough person that I could have treated the bits of this memoir that include David Foster Wallace with a leveled shrug. Like he was just some guy from AA who wore a red bandanna and heavy boots and sent Karr lengthy handwritten letters complete with footnotes. Unfortunately, I’m exactly the kind of person who would subscribe to a magazine called “Hot Literary Couples,” and so Karr’s brief, albeit heated, relationship with DFW left me in the dizzy sugar rush I get from watching “The Hills.”

I’m not alone in this goo-ery. Google Mary Karr, and a suggested add to the search is David Foster Wallace.

Karr keeps a cool distance from him in her writing, the relationship remains balanced between make outs and break ups and never mentioned his tragic end. It is very controlled and void of a gushy rewriting of history, which, considering the circumstances, is pretty nicely played. It took going outside of Lit and reading the essays she wrote about DFW after his death to see that there remains a tenderness for him. (And, of course, her name remained tattooed on his arm til the end. An art project he had completed before their first kiss).

For as much as I love Mary Karr, there were parts of this book that were too similar to the books of Anne Lamott that are shelved in the religion section. Writers, alcoholics, sassy single mothers, finding God, all while surrounded by friends who drop Yoda-esque nuggets of wisdom and serve as on-call support. I had to take the image of Karr I was carrying in my head, and mentally remove Lamott’s dreadlocks, which kept appearing in the picture.

Karr is just such an amazing, meticulous writer. Her roots in free form poetry are so strong that you don’t even want to blink and miss one iota of one sentence. Every word is adding something extra awesome to the natural way she has with telling a good tale. She also has a skilled ear, cataloging fantastic quotes from friends, like this one from her friend John: “Justs as there’s a woman for every man, no matter how ugly, there’s a magazine for every poem.”