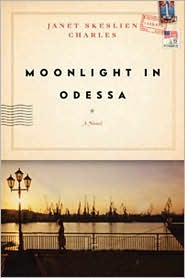 There's something entrancing about a brainiac flirting with a mobster? especially when he flirts back. Moonlight in Odessa is a steamy and somber novel that gives the reader a love story caught in a world of beauty and corruption. It's hard to believe this is the debut novel by Janet Skeslien Charles. Her characters are well defined and the plotline is a daring choice for a newcomer.

Odessa is a town in the Ukraine on the coast of the Black Sea. Like so many other European cities the town is filled with great architecture, vibrant art, and breath-taking beaches. Daria, used to people uneducated on geography or history, simply says “Russia” or “the dark former Soviet Union” to those who give her confused stares. Bribery and corruption are a basic part of life, just like black-outs, food shortages, and e-mail order brides. Daria is educated, independent and her luck is strong. Top-notch English skills allow her to work an esteemed desk job at a foreign shipping company and moonlight at a match-making service that connects Ukrainian women with American men called ‘Soviet Unions.’

I peered at the men in the semi-darkness. Some looked confident. And rightly so. They were a rare commodity here. We looked at them and saw three-course meal tickets with cell phones and credit cards. A direct flight to the American Dream: money, beautiful homes, stability.”
-pg 59

The idea of a better life, to most in Odessa, means an American life. Daria tries hard to fight the pull of America, just as she fights to ignore her lust for Vladimir “Vlad” Stanislavski, the local mafia boss. Unfortunately, life is lonely in Odessa and men are scarce. While Daria has slickly avoided sexual advances of her boss, she just can't stop writing to American men, and she definitely can't stop falling for Vlad.

For all her book smarts, Daria is still na?ve. She spends most of her time fantasizing about an ideal life in the states, full of freedom and riches. Her stubbornness and quest for perfection, at times, make her a tough character to like, but hers is a journey we can't help be mesmerized by. Ultimately, Daria falls into the willing arms of Vlad, but after he disappears for months without so much as a phone call, she makes her choice. When Vlad finally shows up with ring in hand, reeking of vodka, she raises her chin and finishes packing her suitcase.

I was marooned in the country.
We didn't live anywhere near San Francisco.
My husband was not who he'd claimed to be.
He gave me no privacy unless I was in the bathroom.”
-pg 246

Daria discovers America is not at all that she imagined. Her new husband is controlling and demanding; he even calls her Dora, because it's easier to pronounce. It seems fitting that that book drags in this section, but portions seem almost stagnant. The grass is definitely not any greener in America, especially when it takes two years of marriage to get a green card. Armed only with a visa that could be revoked at any moment, Daria is faced with a situation much more difficult than bribing port officials, but nothing a tough Ukrainian girl can't handle.

This novel presents the reader with stark contrasts and contradictions; a mobster with a heart, a sleazy boss who turns out to be hero, and backstabbers who used to be best friends. Skeslien Charles has a knack for writing about relationships and everyday people. Her description of bored housewives, waitresses, and hustlers comes alive on each page. Moonlight in Odessa proves you don't need a man to succeed in life, but a little bit of love always helps. Skeslien Charles crafts her first novel expertly.