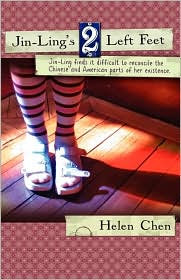 Jin-Ling is an American-born girl whose parents came to this country from China bringing their customs and culture with them. Jin-Ling’s 2 Left Feet, Helen Chen’s debut novel, could have been an ordinary run-of-the-mill young adult novel, but the way Chen blended American and Chinese culture made this book a pleasure to read.

Jin-Ling is a high school senior worried about which boy might ask her to the prom, and which college she’ll hopefully get accepted to. As is typical, the boy Jin-Ling wants to go to the prom with is different from the boy who wants to take her. She is also hoping that she’ll be accepted to Harvard. This is where the novel grabbed me. Why Harvard? It seems that the far biggest reason is so that her father will be happy. It was the cultural clashes inside of one teenage girl that kept me wanting to read more.

If the Chinese part of me is yin and American part is yang – today ying and yang definitely aren’t in balance. Today I’m happy to be Chinese.” p. 45

Told in the first person, Chen does an excellent job of sounding like a teenager while staying in the young girl’s head. Jin-Ling is far from perfect. She makes mistakes, and what I found refreshing, she blames others rather than owning up to them. That made her a much more believable character for me. Also captured quite realistically was the love/annoyance of her little brother, Shaw-Ming. Yes, they drive each other crazy, but when it comes down to the nuts and bolts, it’s clear they will do anything for each other. But besides the outside conflict of prom dates and college, the inner conflict takes top stage throughout. The frustration is prevalent.

To me, my opinion doesn’t count. I want to change that. I want to recognize my own individual right just like most of my friends do, but that concept of I-have-to-listen-to-my-parents is carved in my brain! It came from my Chinese gene!” p.146

Jin-Ling’s 2 Left Feet is an ideal book for high schoolers, especially the girls, but also for guys who want to catch a glimpse of understanding on how the feminine mind works. Adults will enjoy this book also, but moreso for the cultural clashes. Plus, Chen snuck in some wonderful Chinese recipes.