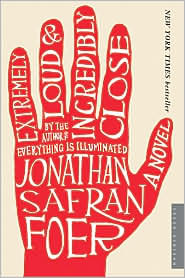 Put on your hip waders, folks. I’m about to heap an enormous amount of praise on to Jonathan Safran Foer’s novel Extremely Loud and Incredibly Close.

The star is 9-year-old Oskar Schell, perhaps the most likable protagonist to ever land on a page. To quote his own business card, Oskar is an inventor, jewelry designer, jewelry fabricator, amateur entomologist, Francophile, vegan, origamist, pacifist, percussionist, amateur astronomer, computer consultant, amateur archeologist, and a collector of rare coins, butterflies that died natural deaths, miniature cacti, Beatles memorabilia, semiprecious stones and other things. He doesn’t have a fax machine. Yet.

Oskar’s father dies on 9/11. They had an awesome mentor mentee relationship in which his father created treasure maps and sent his young, socially awkward, super inquisitive son out into the world to look for clues. They examined the New York Times for errors. Oskar always dresses in white and plays a tambourine everywhere he goes. He is a huge fan of Stephen Hawkings.

Oskar finds a key hidden in the bottom of a vase in his father’s closet. It is in an envelope with the word Black written on it. Oskar decides to contact every person with the last name Black in all of New York City, and find out what they know about his father.

Along the way he meets and befriends dozens of people with dozens of stories and diverse lifestyles. Oskar, of course, charms them silly with a personality that only adults can appreciate.

Meanwhile, his grandmother’s story is told at the same time. How she came to marry her dead sister’s boyfriend, a sculptor who doesn’t talk — after they both survived an attack on Dresden in the 1940s. He leaves before their child is born, but creates zillions of letters to his unborn child.

The novel is filled with photographs that Oskar includes in his scrapbook, titled “Things that have happened to me,” and one-page notes that his grandfather writes in the absence of voice.

For much of this story, I was hyper aware that I was reading the best book I have ever read. There was girlish squealing, coupled with cartoonish jaw drops. It’s fun, it’s smart, and it is excruciatingly clever. You will want to open JSF’s skull and get a looksee at what kind of brain could conjure this story.