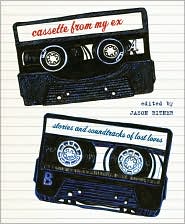 Cassette mix tapes are a generational thing. My parents didn’t make them, probably because they had those crappy 8-tracks. At least they had vinyl. I made tons of mix tapes for practically anyone I met. I started when I was 14. This book features all kinds of mix tapes, but it will be best enjoyed by the generation of kids that invented the art form that we call the mix tape.

Each story features the play list of the tape and usually a picture of the tape itself. Some adorned tapes with collage art, some with a black Sharpie. It depended on who was on the receiving end. Sometimes mix tapes were part of a courting routine, sometimes not. Larry Smith’s was from a girlfriend and it’s entitled “My Valentine Baby”.
The stories in Cassette from My Ex are collected by and edited by Jason Bitner who created CassetteFromMyEx.com. The book features essays by such seemingly hip movers and shakers as Rob Sheffield (he’s written for Spin and Rolling Stone and has his own book) and Starlee Kline (who contributes to “This American Life”).

For me, it’s not about who wrote it, it’s about the story of the tape. It’s slightly voyeuristic reading the track lists and getting the story behind the motives, kind of like finding a stained cassette on the ground and popping it into the car stereo. One of my favorite stories in the collection is the one remembered by Todd Bachmann called “Somethings Borrowed, Somethings Screwed.” The tape was given to him by his music manager at a CD “record” store in a strip mall. His manager, Phil, name drops and relates exaggerated stories about mingling with famous musicians and actors. The tape he gives Phil is made up of cover tunes by alternative artists. They both end up at a Violent Femmes show and Phil shows up with Richard Butler from the Psychedelic Furs.

After reading this book, I climbed in my closet and retrieved a bunch of mix tapes I still have. I leafed through the book in front of my stereo, which still has a cassette player, with the mix tapes playing. I reminisced – also gloating in the fact that I was a superb mix tape DJ compared to the play lists in this book – but I’m sure everyone who grew up in the late 70s/early 80s thinks that about themselves.