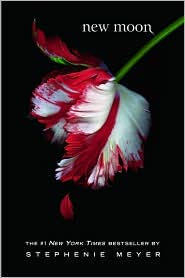 Phase two of Stephenie Meyer’s beloved vampire series begins on our self-lathing heroine Bella Swan’s 18th birthday. In New Moon, the gothess is struggling with a Matthew McConaughey-ism: She will keep getting older, while her boyfriend stays the same age.

Bella reluctantly agrees to par-tay with the pasty bloodsuckers, who buy her a car stereo, an awesome mix CD, and a cake. Unfortunately, an incident involving a paper cut from some vicious wrapping paper sends one of the Cullens into a snarling, drooling, taloned kill-kill-kill spiral. Bella, world-renowned for her clumsiness, manages to Pollack the Cullen’s place with her blood. And when things settle down, her Robert Smithian soul [or lack thereof] mate slips into an emo funk. After a few days of shoegazing, Edward Cullen leads Bella into the woods and dumps her mortal ass. She finds a nice plot of moss, curls up into the fetal position, and slips into a shock coma.

Months pass. Bella is on autopilot, until she realizes that by putting herself in danger, she can conjure Edward’s voice in her head. When she approaches some rapists in town, Edward hisses in her ear. Bella decides this is a good time to delve into some X-treme sports like motorcycle racing and cliff diving. She has become a suicidal adrenaline junkie, and Edward’s voice provides the hit she is seeking.

It all seems a little like the movie “Crash.”

Meanwhile, in order to fill the giant hole in her heart, Bella begins spending time with Jacob Black, a local longhair two years her junior. Jacob has got it bad for Bella, which she acknowledges and encourages, but cannot reciprocate. Just when things are getting hot-n-heavy, Jacob pulls away from Bella. It seems that puberty has made him eligible to join a wild pack of werewolves from the reservation. Their sole mission is to eliminate roving vampires.

Bella, of course, accepts him for who is he. She has become a monster magnet, but who is she to deny her fate? Of course, this means that two of the most important men in her life sometimes develop an unseemly layer of fur and could potentially find themselves incisors deep in her thigh muscle.

Things get a little crunk. Old villains return, Bella is in danger, and Edward misreads his own telepathy and goes all “Romeo and Juliet” in Italy.

Team Edward will rue the fact that the anemic male lead appears in only about 25 percent of the book, save for Bella’s auditory hallucinations.

I am not sure why I didn’t hate this book as much as I hated Twilight, but here is my hypothesis:

In the first book, Bella is a flat character with no personality. She is defined only by her clumsiness. Now that filmmakers have given her a face and a voice, she has a bit of depth that Meyer could never finagle in print form. I like Kristin Stewart. And now it is her face I see when I am reading.

Don’t get me wrong. I’m still eons away from any sort of Twihard fandom. I still think Meyer’s portrait of the teen-aged girl is scary and makes me weep for the future. I still believe this is a Harlequin romance set in goth wrapping paper. And I know that I am dumber for having read this. But to be fair, I have to admit this one sucks a fraction less than the last one.