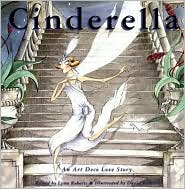 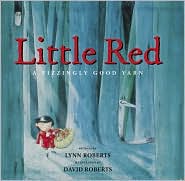 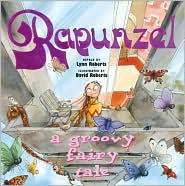 I love a new take on an old tale. It’s why I see every version of Hamlet I can. There is a comfort in knowing what comes next, but there is also sheer excitement in never having seen it in such a way before. Lynn Roberts and her illustrator brother David Roberts have given us some very fresh, very stylized versions of three snoozer fairy tales.

Their first venture was Cinderella: An Art Deco Love Story. In this version Greta, later known as Cinderella, is a 1920s flapper girl. Yes, her mother still dies, but her father lives to marry another woman with two mean daughters, Elvira and Ermintrude. E & E swipe all of Greta’s fabulous Gatsby-esque clothes and make her sleep in the kitchen. Of course the prince announces he’s looking for a bride (on the radio, because it’s sooo 20s), and of course there is a ball. When the stepmother and stepsisters step out in all their finery they look like they are stepping of 1920 magazine covers.

Naturally, Cinderella’s fairy godmother appears, and helps her out. But in Roberts’ version she changes a leek into a gleaming Rolls Royce and that’s how Cinderella arrives, in style. Naturally, the prince sees her and falls in love, but she has a curfew and leaves the glass slipper behind. Because Roberts doesn’t kill off Cinderella’s father, he’s able to come to her aid when the prince arrives the next morning looking for the girl whose foot can fit the shoe. Roberts also gives Cinderella a healthy dose of forgiving kindness, since the last page is a wedding photo of Cinderella and her prince with her two stepsisters playing bridesmaids and making silly faces in the photo. This is the moral that resonates in this updated version; it’s not someday your prince will come, it’s that even though people treat you poorly, you should forgive them.

In Little Red: A Fizzingly Good Yarn, Little Red’s real name is Thomas and Thomas loves red. Thomas’ parents own a cozy inn called “Ye Olde Belch.” It is here where Thomas packs his basket of goodies for Grandma, including a keg of ginger ale – made at the inn. While much of the story stays the same as the traditional tale, Red bests the Wolf with the ginger ale. First Red tells the Wolf that he’s not very tasty and ginger ale would be much better. The Wolf chugs down the keg, burps up Grandma and promises to stop eating people if Red continues to bring him a keg of ginger ale every week. Done and done.

The last book (so far) is Rapunzel: A Groovy Fairy Tale. This story is set in the late 1970s, and Rapunzel’s long hair fits right in with the groovy vibe, retro clothes, and platform shoes. Rapunzel lives in an apartment building owned by her evil Aunt Esme, and guess what? The elevator is broken, so Esme, not wanting to walk downstairs takes Rapunzel’s Red Hair Express. Rapunzel stays in her room watching her lava lamp, playing with a Rubik’s Cube, and listening to Bowie records. She’s a modern girl, but hasn’t set foot outside the apartment.

One day, a cute boy rides by on his banana seat bike and spies Esme (the school lunch lady) coming down a long rope of hair. Curious, Roger calls up and gets hauled into the apartment by Rapunzel’s hair. Instantly they fall in love. Of course. Roger plays in a band, so they share music and talk all the time. But one day Rapunzel spills the beans to Aunt Esme saying something to the effect that Esme is much heavier than Roger. Esme promptly cuts off Rap’s hair, and kicks her out of the apartment. Then waits for Roger to show up to give him what for. Sadly, Rap roams the city, sleeps in a doorway, and befriends a stray cat. Roger shows up to the apartment and unknowingly gets pulled up by Esme with Rap’s cut off hair. Esme pushes Roger out the window. Luckily, the hair breaks his fall, but he hits his head and doesn’t remember a thing. After seeing a poster for Roger’s band at a music store, Rap shows up to his gig. He takes one look at her, remembers everything, and they live happily ever after making wigs from Rap’s old hair.

While all three stories are retold by Ms. Roberts, they wouldn’t be half as good if it weren’t for such extraordinary artwork by David Roberts. Cinderella and Rapunzel really stand out artistically. And in the Illustrator’s Notes, Mr, Roberts imagines Cinderella and Rapunzel to be related some how, so there are somethings from Cinderella that
have been passed down to Rapunzel. Which is just cool. My four year old daughter loves these books. She’s heard the stories before, but the modernization of the tales and the groovy visuals help her to understand that while she might recognize the names and plots, they are told differently, they look different, and different is good. As an adult, these stylized tales are a real treat. I don’t mind reading these books over and over again. The artwork is so detailed that you see something new with every turn of the page, no matter how many times you’ve seen the page before. Simply wonderful.