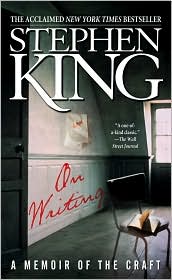 There is a place in my brain that had seized up and was unable recognize writers who produce book after book after book. It was nothing I ever thought about, just on some subconscious level I had created an equation that quantity diminished quality.

In my adult reading years, I have completely ignored Stephen King. There’s more to it than just his feverish pace. I read a handful of Stephen King books when I was a tween, so it was like “Psshhh. How could I like something that I liked in sixth grade?”

I have since combated that argument with two words: Beastie. Boys. If three dudes in hoodies and sneaks from Brooklyn can rock my world for upward of 20 years, why not Stephen King?

King actually addresses prolificness in his memoir slash how-to book On Writing. He turns an eye toward those famous writers who have written just one or two books and asks “How long did it take them to write the books they did write, and what did they do with the rest of their time?”

“I’m probably being snotty here,” King writes, “But I am also, believe me, honestly curious. If God gives you something you can do, why in God’s name wouldn’t you do it?”

On Writing is simply fantastic. One of the better books I’ve read on the subject, actually. It has a conversational flow, going from “this is how I write,” to “don’t use passive voice” to “don’t use adverbs,” and back to “one time I got run over” all very seamlessly.

The things King stresses are: Read a lot. Write a lot. It is completely intuitive, but good to hear. Like a note on the refrigerator that says: “Do you really need that bowl of ice cream?”

King’s entire life has been a path toward fiction writing, from the Onion-style newspaper stories he wrote about teachers and classmates, to the rejection slips he stuck to the wall as he began submitting his stories. He is all inclusive in his reading, not letting snobbery stop him from enjoying something like John Grisham’s The Firm. Plus, the nuggets from his life are fascinating. (He doesn’t even really like the book Carrie.)

This short piece of work is like a literary cattle prod. A definite must for anyone who has ever wanted to write novels and short stories. And according to King, pretty much anyone can do it.