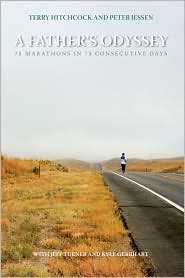 In the weeks leading up to the 1996 Olympic games in Atlanta, Georgia, Terry Hitchcock ran 75 consecutive marathons. Hitchcock ran from Minneapolis to Atlanta to raise awareness to the plight of children in single-parent households. A single parent because of his wife Sue's death to breast cancer, Hitchcock decided he wanted to try to make a difference in the lives of single parent families. A Father's Odyssey is an account of Hitchcock's rationale, training, and eventual run to Atlanta.

The vast majority of this book is what amounts to a daily journal of Hitchcock's run, which roughly follows my family's annual drive to Florida. With the exception of Hitchcock's run through Iowa (we drive through Wisconsin and skip Iowa), I was familiar with his route. Being a lover of cows, my heart was warmed when Hitchcock admitted that he talked with my bovine friends as he ran by them grazing in Iowa's farm fields. Hitchcock's candid accounts of physical hardship were always apparent, as he would often describe how his body felt like it was breaking down (the guy ran from about Nashville to Atlanta with a fractured leg). I was also shocked at how many times Hitchcock had to dodge traffic while running on the road's shoulder.

Yet, there is something a little off about this book. Throughout my experience reading it, I would often find little things that made me question Hitchcock's reason and judgment for writing a book about a run that happened thirteen years ago. The book contains an amazing number of inspirational quotes and personal dedications, which essentially proclaim how courageous and great he was for completing this run. I wondered why one would include these. I would think the run could stand on its own and not need to be propped up by people like Dennis Green, Herb Carneal, and David Wheaton.

I was able to stand this self-promotion because I was amazed at how a person could run 75 straight marathons. Being an experienced reader of theology, I was even able to successfully navigate through his repeated references to Christianity. However, my eyes were opened up when he made this reference to feminism while talking with a St. Louis city councilperson.

We discussed the specific difficulty of being male and a single parent. Males of my generation were raised to be breadwinners. Even some women, who spout feminist rhetoric about wanting caring, sensitive men who can also do housework and help raise the children, are actually suspicious of any man who is primarily a caregiver, as if, in some way, he is no longer a real man. (141)

Yikes. This sounds an awful lot like complaining. Single parenting is hard, regardless of gender. I wonder why Hitchcock, in his conversation with the councilperson, didn’t consider how difficult it must be for a woman to be a single parent, especially one that does not make the same amount of money as her male counterpart.

It also sounds like conservative rhetoric. I was surprised by this thinking, given Hitchcock's willingness to have Paul and Sheila Wellstone's personal recommendation lead off Chapter 9. Apparently, Hitchcock was willing to take the Wellstone name and not the message of hope and equality.

I was not surprised by this tirade in his reflection section.

Reforms like the federal No Child Left Behind law should make it easier to marry elementary and secondary education to higher education by setting standards for what high-school students need to know to prepare for college. But while some states are seeking to promote K-16 cooperation, too often they don't go far enough. The power teacher union resists, saying it can't be done without more money and resources rather than stopping to figure out how to do it with existing funding and resources. Never have so many schools had so much and achieved so much less. (211)

Yep, it is the do more with less thinking of conservative business and politics. The only problem is that we are not running a business-we are educating children.