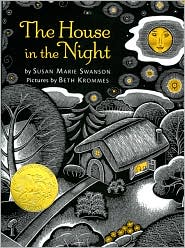 When I started following Susan Marie Swanson on Twitter (@susan_marie), I had no idea she was a Minnesota Book Award wining author whose book The House in the Night also won a little thing called the Caldecott Medal. The things you learn when you ask someone to answer the 6 questions.

Not only is Susan Marie an author and avid reader, she’s a big proponent of libraries and Minnesota writers and editors. When she answered the 6 questions she mentioned how in her acceptance speech at the Minnesota Book Awards she gave props to Rosie Foreman, who was the head librarian of her St. Paul branch library at the time; and she also explained that Ann Rider, the book’s editor, works out of her home office in Lutsen, Minnesota. So awesome!

If your favorite author came to Minnesota, who would it be and what bar would you take him/her to?
Oh, let's have Astrid Lindgren (1907-2002) over to the house for a soup supper and local beer–and then have friends and neighbors stop by for cake. Yes, let's do that.

What was your first favorite book?
Winnie-the-Pooh, especially “In Which Piglet Is Entirely Surrounded by Water,” and the mad tea party in Alice's Adventures in Wonderland.

Let’s say Fahrenheit 451 comes to life, which book would you become in order to save it from annihilation?
Definitely a manuscript–Anne Frank's diary or Emily Dickinson's fascicles.

What is one book you haven’t read but want to read before you die?
Pablo Neruda's poetry in the Spanish.