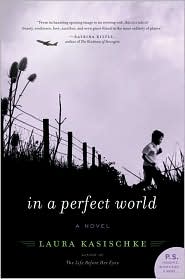 There is a point where contemporary crosses over into fad. It's too soon to tell for sure what category In a Perfect World by Laura Kasischke falls into, but it's likely to be the latter. It certainly is timely, but so is a TMZ celebrity newscast and that may be just the problem.

There was tremendous potential in the first couple chapters, which seemed well-written and very entertaining. Thirty-two year old flight attendant, Jiselle, marries a handsome pilot, Mark, and has a whirl-wind, exotic romance. After meeting in an airport bar, there are orgasms in Brussels, and topless beaches in the Italian Riviera. The only downfall is that she is now a step-mother of three and suddenly head of the house while her lover is away at work. Okay, I can handle some fun chick lit, but wait. . .

Suddenly it is the end of the world. A strange virus is killing off celebrities like Britney Spears and average people of all ages (H1N1 or Bird Flu, anyone?). No one knows where it comes from, but your eyes melt and the death is allegedly so horrible doctors are banned from talking about it. Extreme fluxes in climate are affecting crops. Countries are boycotting America, fuel is in shortage, food is in shortage, and morality has all but disappeared. All of a sudden we are getting the girls guide to surviving the apocalypse.

'Whose law? What law? You think the Europeans have any sympathy for us? Ha! We burned that bridge, and all the other bridges are burning as we speak.'”
-pg 164

Mixing chick lit with end-of-times chaos is like creating a German-Mexican fusion restaurant ? a likely disaster. It feels like quickly written, barely researched, alarmist writing. Even the love relationship that starts out so strong is left under-developed. Either Kasischke started two different books and got bored, or decided to draw a lop-sided plotline out of the headlines.

If you are READING this you are going to DIE!”
-pg 3

There is some redemption in the bond that develops between Jiselle and step-daughter, Sara. The portrayal of a teenage girl evolving into a strong, intelligent young woman is reflected in Jiselle's maturity from love-struck mistress to self-supporting, strong mother and protector. This relationship presents a powerful dynamic, enough to propel the determined reader to the final pages, but not enough to save the book.

In a Perfect World is too timely to be a classic. It's political, but neither the book nor the author brings anything new to the table. What it does offer is visions of a fatalistic, plague-ridden, society. If I'm looking for a good dose of depression, I choose to medicate with The Flying Troutmans.