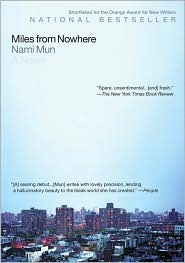 Sit down at a table at Subway. Pull Nami Mun’s novel Miles from Nowhere from your purse. Open the sandwich, take a bite, then crack into Chapter 3, “On the Bus.” And read this:

“Two days of speeding, bagging, drinking creme de menthe, and snorting procaine, and now it was daylight, and the worms were already digging into my skin. The guy sitting next to me bit into a soggy taco. The smell of wet beef made me want to vomit.”

Mun’s debut is the story of a teen-aged runaway, Joon, whose beautiful mother suffers from the kind of mental illness where she may sprawl out in the garden, still wearing her nursing uniform, and lay there, unmoving and unblinking for hours. Long enough for the neighbors to see the crazy. Joon’s father frequently disappears, sometimes to a nearby hotel, where he makes piles of cigarette butts in the bath tub, and drinks himself into a stinky, sweaty unconsciousness. Sometimes he returns, sometimes Joon brings him home, until finally he just stays gone for good. Joon follows suit not long after, when she is thirteen.

The novel is told in vignettes over a five-year span of Joon’s life and how she pokes, prods, and claws her way through a pretty bleak world. There is a story of escaping a shelter with a toughie named Knowledge, who teaches her street etiquette. They hole up in an abandoned building, and steal a Christmas tree from Knowledge’s family’s living room. Joon dabbles in prostitution, gets all hopped up on drugs, falls for the wrong guys. She sells Avon, she goes to NA meetings, she works at a nursing home. Then more drugs.

The stories aren’t necessarily the kind of thing you gather friends around a hearth to read aloud. It’s pretty dark and hopeless. But the words! This novel is a collection of some pretty fantastic sentences and descriptions, including the ones that ruin lunch.

When Joon’s selling newspapers on a subway: “The car smelled of cooked cheese.”
When she’s on a bus that crashes into a station wagon: “The asphalt was a lace of sparkling diamonds — a beautiful, jagged doily for the crushed picnic basket, the soggy bib, the map stuck to the pavement with sticky blood.”
When her mother is laying in the garden: “The left side of her nursing cap was bobby-pinned to her hair but the right side had come undone, as if that spot on her skull had erupted and blow the cap off onto the dirt.”

These little gems crop up throughout the book, and the plot pales a bit in comparison. It’s good, don’t get me wrong. In fact, while paging through it again, I’d think “Huh! I forgot the one about starting her boyfriend on fire.” Then, “Tee hee. The part where she gets rip-roarin’ drunk at that bar with that rich friend was fun.” But it’s when she describes the trannies legs, as she leans against the bar, as “one leg vining the other” that I really felt the bigger kicks.