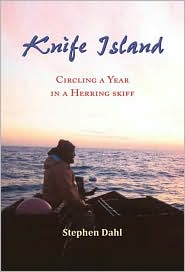 I lived in Knife River, a small town north of Duluth, for 23 years of my life, more or less. At no point did I have any idea the area supported commercial fishermen. I had seen the black-and-white photos behind glass on grade-school field trips to the local historical society, sure, but I thought commercial fishermen had gone the way of buffalo-plaid wearing lumberjacks and fur traders.

Then I read Knife Island: Circling a Year in a Herring Skiff by Stephen Dahl. In 72 pages, I learned more about fishing Minnesota's North Shore than I had from living in the area for more than two decades.

In “Knife Island,” Dahl records a year diary-style, noting what he's doing during which season, how the conditions are and whether the fish are being caught. He also includes short pieces on local history, observations about the North Shore and even a few vinegary harangues on politics. Altogether, it's an interesting read for a variety of reasons.

The temptation to romanticize the life of a commercial fisherman is obvious. Though Dahl seems to bristle at the idea, it's a rather quixotic profession ? a mostly solitary line of work spent tempting fate in an 18-foot skiff in exchange for an uncertain payoff (if the fish aren't there, they just aren't there, Dahl observes more than once). But “Knife Island” doesn't give the life of a commercial fisherman a cute once-over. He talks about frustrations and money worries, and then in the next breath will talk about how he loves what he does. It's a full picture, and an honest one at that.