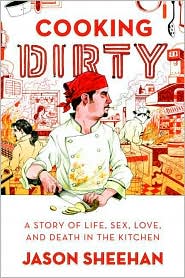 “Chefs are the new rock stars” is a catchphrase that gains momentum every time Andrew Zimmern plugs his mouth with an obscure, barely dead mollusk or the broiled sex organs of an animal unique to New Zealand. The cast of “America’s Next Top Chef” is a limping gallery of jail house tattoos, stealing pulls off a bottle of cooking sherry in the aftermath of a challenge. Walk through the alley of a city’s restaurant district, and you’ll find upward of three suspect-looking dudes in dirty whites parked near a reeking dumpster gnawing on the end of a Marlboro Red.

In Jason Sheehan’s food memoir Cooking Dirty: A Story of Life, Sex, Love and Death in the Kitchen, the kitchen grunt turned writer sets out to present an honest look at what happens behind those swinging diner door. If Sheehan was a rock star in his former life — which started as a dishwasher at a pizza joint, and spanned hotel dining rooms, the Waffle House, Irish Pubs, and all-night eateries between Rochester, New York, and Tampa — he was the sort of ill-behaved rock star who urinated on the plants in the lobby and stubbed cigarettes on the bony ass of a barely legal groupie.

Dude was a bad ass, now removed from the bad assery with a few stories to tell — thousands of years worth, by his own math.

There is the time he defrosted a dinner’s supply of fish with hot water from the power sprays. The time another guy on the line accidentally dipped his hands in the deep fryer, burning them so badly that he didn’t even feel it for a second. Meanwhile, his flesh dripped off his bones. No, wait, that was the burned rubber from the gloves he was wearing. Sheehan finds a bit of tooth embedded in his knuckle after a fight. He wakes up on the floor of a kitchen to find his friend aggressively hitting a version of third base with a hostess from down the street. She’s perched on Sheehan’s cutting board.

Drug deals in the parking lot, tenuous mafia-like connections, black out binge drinking, and longterm relationships with women who might turn his own chef’s knives on him in the middle of the night.

This is some wild shit.

Sheehan writes paragraphs exactly like one would expect from someone who digs hot fires, sharp knives, and cross country drives in a clunker, with little spare cash. He’s a guy without a recipe. That is to say, he writes like a thrill seeker with ADD, who spits the eff word like he has Tourettes. It’s pretty raw and undisciplined with bits of repetition and scattered time lines.

But that is part of what makes it awesome: The lack of convention, and a story that hasn’t been sifted and refined with the globby chunks discarded.

Side note: I had a hard time linking cover art and story to the man in the author’s photo. He paints himself as a long hair in soiled garments in both. The back flap features a photo of a guy who looks remarkably like the character Ryan “Chino” Atwood from “The O.C.”

Whatever. That’s between Sheehan and his god.