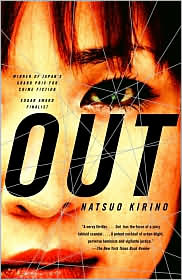 Four very different women are friends-by-proximity, working the night shift in a box lunch factory in Japan in Natsuo Kirino’s slow-broil thriller Out.

The ringleader is the all-powerful Masako, with a mysterious past, and a distant husband. Kuniko is weak and garish, drawn to name-brand knock offs, a heavy coat of foundation, and recently abandoned by her common law husband. Her debt is matched only by her bad ideas. Yoshie is in a spin cycle, widowed and charged with changing her aged mother-in-law’s Depends. She has two daughters, both are assholes. And Yayoi is young and beautiful with two small sons and a philandering husband, Kenji, who sucks pretty bad at gambling.

One night, fresh from a beating and the news that he has lost their savings, Yayoi strangles her husband with her belt in the entryway to their home. She solicits Masako’s help. Everyone but Yayoi crams into Masako’s bathroom, where they filet the mofo, and divide his body parts into dozens of garbage bags which are then scattered throughout the city. This, of course, creates some tension between the woman. Luckily for them, when parts of his body are discovered, the owner of a club where Kenji was last seen is charged with the crime. Plenty of witnesses saw Sakato kick Kenji out of his club, and down the stairs.

Sakato, a bit of a hard-core criminal mastermind, is eventually released and sets out to find out what really happened to Kenji, and who he should murder? for his incarceration and loss of his businesses. This is pretty easy to do, as one of the women pops like a cork, easy with information. By then, Masako and Yayoi, armed with goggles and scalpels, have turned people disposal into a part time job.

The pace is a bit frustrating in this novel where no detail is spared and plenty of voices tell the story. But the simmer technique proves to be worth it. The last third of the book pits two smarties, trying to outwit the other with no trustworthy alliances. It is all very exciting. Think “Laverne & Shirley” meets “9 to 5” and “Thelma & Louise” and “American Psycho” in Japan.