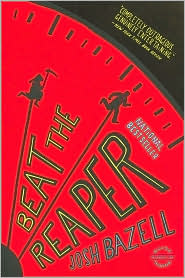 Consider the quaint family sitcom from a simpler time, when the teen-aged son is caught with cigarettes in his letter jacket. In order to teach him a lesson, the Dad character says, “I think it’s cool that you smoke. Why don’t you smoke every cigarette in that pack for me right now! I want to watch!” An hour later, the fresh-faced youth emerges from a self-made smoke chamber, wheezing and then barfing into a plastic garbage can. Dad chuckles to Mom later: “I don’t think Chip will be smoking again any time soon.”

That is the exact effect of Josh Bazell’s debut novel Beat The Reaper, on this self-proclaimed gross-out girl. There is a scene, too close to the end for me to provide context, where our hero Dr. Peter Brown rips open the skin on his own leg, digs his fingers into the muscles and breaks free one of the less-essential leg bones to use as a makeshift knife against some Mafia thugs. Pass the garbage can, please, my sandwich just made a U-turn.

I freakin’ loved this book.

Pietra’s Christmas present from Skinflick’s family is the identity of the mafia dudes who offed his grandparents. He kills them, and because of his natural skill, eases into the role of a Mafia hitman for hire.

While on rounds, Dr. Brown comes across a former mafia acquaintance named Squillante who has cancer and tells Dr. Brown that if he dies in surgery, the family will be immediately alerted to the former hitman’s whereabouts. Brown spends the day juggling his own patients, deflecting sleep, popping pills, and trying to make sure Squillante’s freakish surgeon Dr. Friendly keeps the wise guy alive. In alternating chapters, Dr. Brown’s past is revealed — how he went from a normal teenager to witness protection. This includes shark tanks, the love of his life, and some VIP time spent in lock up.

This entire story is a whiz-bang-boom sprint starring a character who knows a lot about a lot and can martial arts his way out of plenty of bad situations. In an already-crammed day, he finds time to lick the leg of a future amputee, and find an escaped patient. Not to mention saving his own life a few times. Within the first six pages, Dr. Brown has broken the arm of a mugger, stretched the man’s ligaments like putty, and clocked in. It really never slows down from there.

Beat the Reaper is a funny, bad ass story by a the kind of guy who knows that saying “he’s light and stinky” isn’t nearly as great as saying “He’s light and stinky, like a urine-logged towel.” It’s like Bazell took a sentence a normal person would write, pulled out the boring words, and Whacky Mad Libbed better words into it.