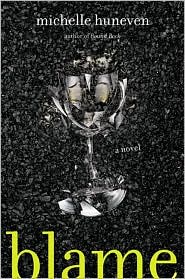 Patsy MacLemoore has a problem.

Years of high-functioning alcoholism have left the main character of Michelle Huneven's Blame at twenty-nine with a resume that includes a doctorate in history, but also countless ill-advised affairs, missed commitments and public embarrassments that walking blackouts have erased from her memory.

Then one morning Patsy wakes up in a jail cell, which is more than the mother and daughter found in her driveway did. With no memory of the incident, Patsy fears the worst and admits to running them over while drunk in order to strike a plea bargain. The rest of Blame chronicles Patsy's attempts to make recompense for the women's deaths and turn her own life around ? until a game-changing revelation makes Patsy realize everything that happened that night wasn't as it seemed.

Huneven has an uneven ethic when it comes to plot. Patsy's long and apparently colorful history of drunk escapades is only ever alluded to in dialogue and never in first-person flashbacks; a wise move, as it avoids any breathless recap. But the passages where Patsy is incarcerated take a lurid interest in the degradation and inhumanity of a women's prison. It's almost like Huneven is writing one of those 1950's pulp novels with the schlocky covers ? “I Was A Thrill-Seeking Woman Jailbird!” perhaps.

Patsy herself is the strong, complex character a novel like this ? a novel about one person's struggle through redemption and the not-so-rosy Promised Land thereafter ? needs to stand on its own. But Huneven's support characters are a puzzle. Does the young gay man Patsy befriends after prison have to be such a mincing, effeminate character? Does Patsy's resentful stepdaughter really need to be so extremely bitter and unpleasant? Maybe these characters were played up for humor. If so, it's so off-kilter I wasn't laughing.

What tips the scales in favor of Blame being a good book, though, is Huneven's skill as a writer in creating Patsy's state of mind. As Patsy makes amends for her crime, the sense of sickness and dread present in her alcoholism gives way to a feeling of penitence and then redemption. The final act (which I can't say much about because it would give too much away) is rendered in terms of uncertainty, of confusion of how or if Patsy can readjust the previous decades of her life. Patsy MacLeemore my have a problem, but she also has our interest.