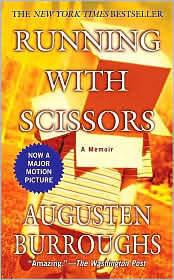 In my last review of Augusten Burroughs' work, Magical Thinking, I was pretty seriously disappointed by his attitude. So much so that I decided I would give him one more chance to show me he wasn't a self-pitying blowhard with Running With Scissors, but if he didn't deliver then I would be done with Mr. Burroughs forever.

Well, he delivered. Running with Scissors is all of what I loved about Magical Thinking, and none of what I hated. The book was relatively linear (and when it wasn't, he avoided the repetition that I denounced in MT), and introduced me to characters so amazingly flawed and beautiful I wondered if they were real. (Off topic, thanks to Mr. James Frey and his Million Little Lies, I have become tremendously distrustful of anything that seems too crazy to be true in a memoir.) From Dr. Finch, Burroughs' mother's psychiatrist, to his children, Hope and Natalie, and the tragic Neil Bookman, Burroughs gave a clear picture of how messed up childhood can truly be. And how even the most traumatic events can be survived, but not without some scarring along the way.

Reading Running with Scissors is like getting a tour through the house of the crazy lady that lives at the end of the street. Burroughs talked about his relationship with a man three times his age, his mother's relationship with the pastor's wife, and his “sister” Natalie's relationship with a man nearly four times her age-she was thirteen and he was forty-one. But, Burroughs manages to write all of these relationships in a way that seems, if not normal, somewhat less than ridiculous. After Burroughs' mother sent him to live with the Finches, the book settles out into a kind of skewed normalcy-a parallel universe where the absurd is completely acceptable. The house had a Christmas tree up for most of the year, the “c-word” flew around regularly, and the family cat is killed because it's trapped-intentionally-under a laundry basket because it's “sick,” though it's perfectly healthy.

By the end of the memoir, actions and characters that had seemed completely insane in the beginning seemed completely reasonable and lovable. And this is where Burroughs' talent lies: he owns his trauma. And, he presents even the most abusive, perverted characters in a tender light-because they are not “characters'-they are people. They are both good and bad, lovable and evil, flawed and perfect. As we all are. So, Mr. Burroughs, I don't take back what I said about Magical Thinking, but I do retract my opinion that you are a waste of authorial space. . . and, who knows, maybe I'll even give Dry a try. . .