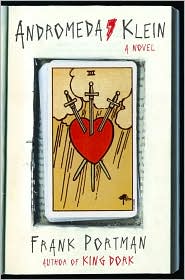 Andromeda Klein is a skinny, goofy-haired seventeen-year-old girl with disorganized collagen which causes her to have fragile bones and bad hearing. Because that’s not enough to make her a high school misfit, she’s also got a couple of wacky parents (Mom’s addicted to online role-playing games and Dad’s a conspiracy theorist) and is dealing with the death of her best friend, Daisy.

Also, Andromeda is a little obsessed with the occult and spends all her free time studying the dark arts, reading tarot cards, and worrying over a sort of boyfriend she calls St. Steve. Oh, and because she’s a high school student there are the requisite mean girls and frenemies who seem to alternately persecute Andromeda and be nice to her.

As a character, Andromeda is top notch. She’s smart and weird and not afraid to do what she wants. It’s a bit of a pity she’s stuck in this slow-moving tome named, aptly, Andromeda Klein.

Portman’s attention to the intricacies and details of occultism is both astounding and incredibly boring. He did is research, which is commendable, and Andromeda spends a lot of time doing her research and we get to read all about it. Over and over and over again. Which is a shame, because it really weighs down a book which would have been stellar if all the boring occult details didn’t get in the way.

I’m all for geeking out on a subject a character is interested in but you have to know when to say when.

After wading through all the dreams and the explanations of gematria and Agrippa and the proper pronunciation of Aleister Crowley’s name, there is a pretty decent story about a nerdy, bookish girl with a laughably over-protective mother learning to navigate the new social waters after losing her only friend.

At times Andromeda’s loneliness and awkwardness is nothing short of heartbreaking and at other times absolutely hilarious. It’s a testament to Portman’s writing that I didn’t toss this book aside during some of the slower parts. Because I loved King Dork so much, I was willing to give him the benefit of the doubt. I’m glad I did because even though the 37-year-old me found the book a bit draggy at times, the 15-year-old me who distinctly remembers sitting on the floor of Waldenbooks in the Northtown mall trying to decide which deck of tarot cards was the best loved the hell out of Andromeda Klein.