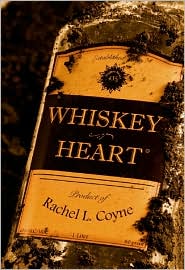 In the opening scene of Rachel Coyne’s debut novel Whiskey Heart, the mysterious narrator Kat is having Ala-tween memories of growing up with an alcoholic father and a mother who was fiercely devoted to him. After bar close, her mother would pack the kids into the Chevy and drive around looking for him, in one case even scooping him off another woman’s front porch while the woman wailed from inside the house.

When she comes out of a car coma that started down south — Kat is back in the rural Minnesota town she fled years ago, having not returned for her father’s funeral or her older cousin Tea’s funeral. The latter being a more serious violation than the former. It’s Kat’s relationship with Tea that is at the crux of the novel.

Tea is a few years older than Kat and grew up in the same house. And she is fascinating: Wild, free, naughty, sassy, awesome boots, an artist, a red hot lover, possibly bi-polar, definitely an alcoholic. The kind of woman who might tip through the open window in the middle of the night, arms wrapped around a bottle of vodka, and ask Kat to come run around in the cornfield. Also the kind of woman who everyone else tolerated for awhile, then not at all, while Kat remained loyal.

Kat’s return is barely a blip in her family’s routine. She is immediately absorbed back into dysfunction that Kat suggests existed before she left home, and in all likelihood never slowed, and from the looks of her niece, may never end. Her brother Mason is rude, her sister Abra has found Jesus, Pearl has a drinking problem that sometimes makes her forget she has a young son, and Kat’s brother Taylor … well, he’s fine. He’s got a nice girlfriend and big plans to move to Colorado. There are horses loose, a cow is missing, kids are running around, her grandmother is in a snit.

This, my friends, is a textbook example of how to write a novel:

Coyne is spare with details, but manages to leave very little unanswered. Her own protagonist barely says more than a sentence until midway through the book, in a rare moment of intimacy with her mother;

She creates complex characters, with more layers than tiramisu. They aren’t necessarily likable people, and at no point is there evidence that they will become more likable, but somehow they are endearing;

The pace of the relatively short story — dare I call it a novella? — is perfectly pitched. I never really wanted to put it down because something was always going to happen or be answered;

The ending was damn near perfect.