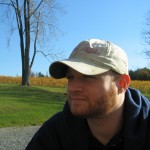 Writing these intros for people I actually know is tough, because I’m going to have to face the music about what I write. Steve Brezenoff is one of my Loft classmates. We’re taking an advanced fiction class together. There’s extra pressure too, because tomorrow my story is being workshopped in class. Maybe if I write nice things about Steve, he’ll go easy on me? Probably not. Which is okay. Arguing with Steve in class is actually a lot of fun. He’s a New Yorker so he’s good at the arguing, which is nice because a lot of Minnesotans aren’t really good at that. Anyway, when Steve introduced himself in class he said he writes chapter books for young readers and that his first YA novel (The Absolute Value of -1) is coming out next summer. I can’t wait to read it. I don’t say that just because he’s my classmate. I say that because I’ve read some of his work and it’s good. Really good. No lie.

What book(s) are you currently reading?
I'm reading Rats, by Robert Sullivan. It's nonfiction: a sort of reflection on rats and there place in New York City, told through historical record and anecdotes from the author. Apparently he spent quite a few dusks sitting in an alley in Manhattan's financial district.

Have you ever had a crush on a fictional character? Who?
Wow, probably several, actually. Tess Durbeyfield comes to mind; who knows why. And any of the girl's Holden Caulfield was interested in, I was interested in. He talked up Sally's butt in her skating skirt quite a bit.

If your favorite author came to Minnesota, who would it be and what bar would you take him/her to?
I'm trying to come up with a favorite who isn't (A) dead, or (B) a hermit, and having trouble. Let's just go with the late John Gardner, author of Grendel and October Light, among much else. I'll take him to Neumann's. I hear bikers like it.

What was your first favorite book?
Without a doubt, The Invasion of the Blue Lights by Ruth Glick. When I was nine, I got it through book club, I think, and read it over and over. I haven't read it in twenty-five years, and I suppose I probably shouldn't.

Let’s say Fahrenheit 451 comes to life, which book would you become in order to save it from annihilation?
The Canterbury Tales. I love reciting the parts I memorized in college, so I'm sure it would be fun. And hey, preserving a relic language and a relic book in one shot-nice bonus.

What is one book you haven’t read but want to read before you die?
Gravity's Rainbow. But I bet I never will. I mean, come on.