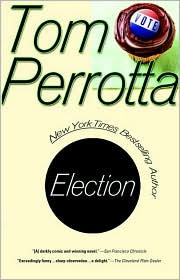 If I met Tracy Flick, I'd probably ask for her number. But I'd also be kind of scared of her.

Tracy is the axis around which the universe of Tom Perrotta's Election spins. Ambition personified, she's heading straight toward an uncontested victory in the race for student body president until a popular history teacher, Mr. McAllister, chokes on her overwhelming sense of entitlement and entices a popular jock to run against her. As the dueling campaigns unfold, we're drawn into the petty squabbles of both high school and politics (small-scale and otherwise) and granted a window into the dark-minded motivations of people who should, officially, not have such thoughts.

The great unanswered question of Election: who is Tracy Flick, exactly? On one hand, she's an overachieving honors student who relishes playing by the rules. On the other, she sleeps with her English teacher. In private her fellow students, and even her teachers, drool over her body, but she's revealed to be deeply lonely and isolated from her peers, with no close friends or boyfriend. And where did this ruthless will to accomplish ? just accomplish, it does not matter what – come from? In the passages she narrates, Tracy never explains why she has this burning desire to win the election, or to do any of the other things she crams her resume with. The novel hints that her divorced mother, lonely and living vicariously through her only daughter, may be the driving force behind all this, but does not conclusively say so.

Never getting a good read on Tracy is a double-edged sword. Yeah, people are multi-faceted, but a teenage girl who's both daydream-inducingly hot and envy-fomentingly smart? Does such a creature exist?

Perrotta has a knack for finding the soap opera elements in pedestrian rituals (see bored suburban parents in Little Children and his middle-aged divorcee in The Abstinence Teacher). Election doesn't feel unrealistic, but it doesn't feel boringly familiar either. It's conceivable Election could easily have unfolded at your high school. In fact, you probably knew a Tracy Flick. After reading Election, you'll know her even better ? maybe.