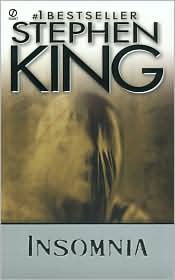 There is only one thing to do while your boyfriend is part of a world-wide online project devoted to reading the book Infinite Jest over the course of three months: Pick up your own big fat book so you can sympathize with him when he mentions how his David Foster Wallace weighs down his backpack, and how he has 600 plus pages to go, and my-God he has barely made a dent.

Okay, okay … Stephen Kings’ Insomnia has nothing to do with Infinite Jest, beyond the fact that they both weigh as much as a melon. But it did take me more than three weeks to finish, which is a Karenina-ian length of time for me to spend on any single piece of fiction.

“What does it matter,” the aforementioned boyfriend asked. “You would be reading anyway. Why does it matter if it is still the same book?”

Um … because I have the attention-span of a 20-something with Adderall withdrawl? I like to move on to the next book. Preferably a new book, with a shiny author photo, and fresh blurbs to comb.

“How long it takes to read” weighs heavily in my personal book-ranking system. This is unfortunate, because I did really like this book. Ralph Roberts, pretty deep in his AARP years, is struggling with early-waking insomnia. His wife has just died, and he starts waking earlier and earlier until he barely gets his Zzzs past 2 a.m. He starts seeing strange things: Colorful auras coming off of the people in his small Maine town; small bald men dressed in scrubs and carrying scissors who no one else seems to see.

His neighbor Ed Deepneau has lost his ever-loving mind, and begins beating the crap out of his sweet wife Helen. It’s very out of character, and when Ralph tries to talk to him, Ed says these strange things about the Crimson King and dead babies. Somehow it all connects to the arrival of a controversial feminist who is coming to their town to give a speech.

Ralph realizes he has more super powers than he realized. And one of his best friends, Lois, confides that she is also experiencing insomnia. They join forces in a sort of Hardy Boy-and-Nancy Drew meet Mario and Luigi meet the cast of Cocoon, as they shoot sparks out of their fingertips, steal power from strangers, and hop between layers of reality.

This is all very sweet and adorable, and I loved the epilogue — not just because it meant I was almost done with the book, but because it is a cute finish. I cried.