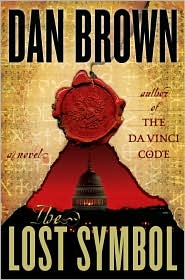 Within the first thirty pages I could not believe Robert Langdon’s sheer stupidity at falling into another trap. Shouldn’t his psyche be damaged enough from his experiences in The Da Vinci Code and Angels & Demons? No. The trap is perpetuated by the same type of villain in the previous books – one that could be stereotyped as freaky by the mainstream. You may remember the self-flagellating albino in The Da Vinci Code. The villain in The Lost Symbol is a tattooed shaved guy over six feet tall.

It was easier for me to believe the first half of the book than the last half. I don’t know if that’s because I just got fed up, or if it had to do with the inane plot twists I saw coming. Most of them anyway. I won’t go into detail because I said no spoilers, but if anyone wants to discuss the gimmicky ending with me, send me an email.
Dan Brown’s writing didn’t bother me in The Da Vinci Code. I don’t know if that’s because it was seven years ago and I didn’t notice or didn’t care. I did notice a lot of annoying traits in this one. He tends to write clunky list sentences. For instance

Is ambrosia really an Ancient Mystery?

Two pages earlier he has another doozy – he states that ancient texts are obsessed with the power of the human mind and then goes on to list four examples. To get to his point, he often lists many when just one would be sufficient. His overuse of italics drove me batty. In two pages I counted sixty-four words in italics. He likes to repeat himself -on page seven,he describes Langdon’s friend Peter Solomon as a father figure, and does it again with almost exactly the same words on page fourteen. In a book over five hundred pages this can get, well, repetitive.

Then, at the very end, he has to throw in a Twitter reference. So unnecessary in a book about ancient mysteries.
So what did I like? I like how he throws in smarty pants facts about the history of neckties and tattooing. I like his use of diagrams and little illustrations. I like learning about Noetic Science. There are some books that I will read that piqued my interest after this one.

I read this to be entertained, but I was more annoyed than entertained.