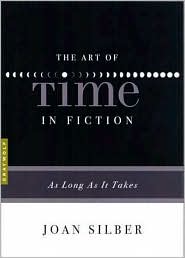 Tralfamadorians can, of course, see in four dimensions. They view time ? all the moments that comprise all of eternity ? as we might view the Rocky Mountains: for them time is solid and permanent, and the Tralfamadorians may enter whatever moment might interest them at any time. “It is just an illusion we have here on earth,” says Billy Pilgrim, who was abducted by and came to understand the Tralfamadorians in Slaughterhouse-Five, “that one moment follows another one like beads on a string, and that once a moment is gone it is gone forever. When a Tralfamadorian sees a corpse, all he thinks is that the dead person is in bad condition in that particular moment, but that the same person is just fine in plenty of other moments.”

Then there's Einstein, who discovered that a body moving at high velocity ages more slowly than a body at rest. Then there's Nathan Zuckerman, who observes one of his former classmates at their 45th high school reunion in American Pastoral. “On him,” Zuckerman says, regarding the man's surgery scars and hearing aids, “time had worked overtime.”

What it comes down to, as we all know and experience, is that time is ethereal and elastic, quantifiable but un-understandable. It affects us physically as well as psychologically. It provides the most basic infrastructure of our lives. But for us (we who are not from Tralfamador) time is invisible: we can see its influence, but never the thing itself. And maybe because of this, it achieves the same status as other invisibly powerful entities that people believe in, or not, as it suits them ? love, truth, beauty, the soul, God. Et cetera.

Naturally, time ? its progress, its affects, its apathy ? is an important, often central component of art. “All fiction has to contend with the experience of time passing,” Joan Silber writes in the introduction to The Art of Time in Fiction: As Long As It Takes, which is part of Graywolf Press's instructive The Art of series. “First one thing happens, and then another: that's a story for you.”

When beginning a narrative a writer doesn't just consider time, he creates it. In fiction, a day can be a sentence or it can be 933 pages (see my annotated edition of Ulysses). It's completely up to the writer to determine how much attention twenty-four hours deserves. And it's not just about temporal length, either: time can be a setting; time can be a thought; time can be a character ? a villain.

Through close reading of master texts, Silber attempts to consolidate and explain all of this. She breaks time down into several different categories, which serve as chapter headings: Classic Time; Long Time; Switchback Time; Slowed Time; Fabulous Time; and Time as Subject. Despite her efforts at organization, though, the book feels a bit disordered. Silber often ignores her own groupings, or provides examples so esoteric or obscure that they end up not being very helpful.

(The word helpful here may seem a little odd. I'm taking for granted that The Art of books are basically how-to texts for writers. Their purpose is to present nuanced aspects of writing ? other titles include The Art of Subtext, The Art of the Poetic Line, and The Art of Recklessness ? in such a way that, after reading them, would-be authors should be able to use these elements of writing more expertly than before. The title page of each installment begins, “The Art of series is a new line of books reinvigorating the practice of craft.”)

The first segment of The Art of Time in Fiction concerns Classic Time, which Silber defines as, “A brief natural span ? a month, a season, a year ? handled in scene and summary.” As her master text she selects F. Scott Fitzgerald's The Great Gatsby, and at first it seems a gorgeous choice because its events all happen within a single summer. But, as Silber notes, Gatsby is a book rooted in the past, which makes it a tricky example because so many of the events and emotions ? Gatsby's initial courting of Daisy ? are not within the actual pages.

Instead of a lesson on how to make time march over the course of a season, we get a few mini-tutorials on the art of flashback, of maintaining narrative point of view, and of how to make a summary feel like a scene. These are useful techniques, but none of them is specific to books bound by classic time. In this instance, Silber is more concerned with how to bring the past to the surface than with how to make the present move forward, which, nominally, is what the chapter should be about.

There's a lot to be learned from Fitzgerald's methods, and Silber's focus on his ability to generalize time is especially useful, but the way the information is presented makes the reader work a little too hard to extract what's helpful; we want the effortlessness of delivery pizza, and this is take-n'-bake.

Silber is at her best when she's at her most didactic. Her segments on One Hundred Years of Solitude (Fabulous Time) and Henry James's “The Beast in the Jungle” (Time as Subject) demystify seemingly complicated methods of plotting in simple, precise terms that are easily accessible.

Accessibility isn't Silber's strong suit, though. She's clearly in love with her subject, and that plays well for her and keeps the book readable. There are a few bright spots worth noting, which are clearly the result of many hours thinking about time's relation to fiction. For instance:

It strikes me again how many works of fiction end with a character's death… The use and reuse of death as an ending points to the inevitable resemblance between the arc of story and the arc of an individual existence rising and falling. It indicates, among other things, how elemental form is.

But too often her examples are too specialized to be of any use. “It is true that this technique might be a disaster in the hands of a lesser writer,” she says of Yu Hua's To Live (Long Time); “Everyone knows that a bad imitation of Proust is soporific and precious,” she says when analyzing In Search of Lost Time (Slowed Time). Unfortunately, those of us reading the book probably are, for now, the lesser writers, we are the bad imitators.

If she had narrowed her focus a bit further, The Art of Time would probably be a more effective book. If she'd limited it to exploring how times move at different paces, or the different roles that time can play, or the interplay of time with memory and aging. In trying to cover all these facets, though, the lessons tangle, and it's difficult to tease out the meaningful strands.

So while it's dazzling to see how Virginia Woolf covers seven years in the “Time Passes” segment of To The Lighthouse without using either scene or summary, it's a little sad to realize that her style is inimitable. And Silber concedes this point: “What can be learned from what Woolf does in To The Lighthouse?” she asks. “Perhaps what we can take?is a reminder of the freedom available, the purity of boldness, the triumph of dare taken.” Which is kind of like saying, “Don't even bother trying to do what Woolf does, but try something on your own, something a little simpler, and maybe that will work, too.”

All in all, this is the main function of Silber's book. And the importance of that shouldn't be discounted. Merely reading through these lessons does get one thinking about the notion of time in fiction, its form and function. Fixating on the subject for a little while, and seeing some master examples under a magnifying glass (even if the glass is smudged) will likely lead a writer to develop some thoughts and techniques of his own. Those notions just might be different from any that Silber puts forth.