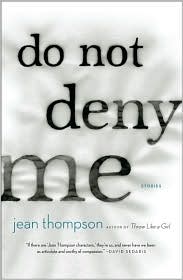 When I first discovered The Hold Steady it was love at first listen. They were like nothing I’d ever heard before. I fell hard and fast and there was no looking back. But, sadly, as is often the case of for fickle young girls, the love grew tired. As The Hold Steady and I fell into a meaningful, comfortable relationship I began to grow restless. I missed those first exhilarating months –butterflies in my stomach and a racing pulse. With each record that was release, I began to grow a little resentful. Yeah, sure this is good and all, I thought, but it’s not like that first time.

And while my love for the band hasn’t necessarily abated, it’s just not the same. I’ve come to dub this “The Hold Steady Effect” which is clearly defined as: A phenomenon whereby nothing seems to blow you away quite like the first experience, and while it’s good and all it still makes you long for that first mind-blowing time.

I fear Jean Thompson’s suffering from The Hold Steady Effect (which would be kind of awesome had she mentioned THS in her Largehearted Boy Book notes essay). It’s sad. Her latest short story collection Do Not Deny Me is a good, readable book. Solid writing, decent stories, everything you want. Right?

And yet, it still left me hankering for that first time I read Throw Like a Girl. Somehow, something was missing, and I can’t quite figure out what it was. There was just nothing in this book that grabbed me by the front of the shirt and shook me, nothing that made my heart beat goofy with glee. It was just, I guess, passable– better than a kick in the head, not as good as ice cream.

One thing I do have to say though, is that I’m not sure about this trend of multi-point-of-view stories. Jean Thompson has one in her collection and Mary Gatiskill did too. I don’t dig it. Time is so compressed in a short story, you have so few pages to get things going that I get annoyed when I’m put into a second character’s (and in Gaitskill’s case third, fourth, fifth. . .) point of view. It feels like besides the point, a distraction, and I find myself wanting to get back to the actual point.

It’s been a rough year for me, two of my all-time faves leaving me a little disappointed. Oddly enough it was each of the author’s third collection. Maybe there’s something in literature akin to a sophmore slump and it starts with your third collection.