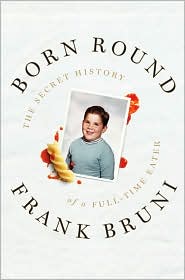 Frank Bruni was a looming presence in a book published in 2007 chronicling the Manhattan restaurant Per Se’s hopes for a four-star review from the New York Times tough-ass food critic. The writer, Phoebe Damrosch, was a hostess-turned-server, and one of her story’s central conflicts and obsessions was spotting Bruni when he came into the restaurant, and making sure he had the best possible experience. That crumbs were swept up correctly; plates were pretty; the check presented to the correct diner.

Now, two years later, Bruni has written just the sort of book that Damrosch and her coworkers — and not to mention anyone associated with upscale dining in New York City — probably would have loved to snag a glimpse of during the five years in which he traveled the city fork load by fork load.

Bruni’s memoir Born Round, reveals him as human. His my-life-til-right-now story starts with his Grandmother coming to the United States from Italy, and her food-is-love approach to family.

Little Frank Bruni’s plate is always piled high. He struggles with his weight, masters the bulimia-laxative combo meal, his pant size creeping to numbers he can only commit to wearing if they are from Gap or TJMaxx. It’s temporary. He’ll run further, stop gorging on Chinese food and Ben & Jerry’s. He won’t buy a nice pair of pants in that size. When that cute guy from that cool party asks him out, he tries to make a date at least four days away so he has time to drop three to five pounds.

Once Bruni finds the right work-out to plate-load ratio, his story becomes more about what it is like to be the New York Times food critic. First disguises, then not. Trying to remember the fake name on the reservation. Dining partners who don’t have the same level of suave when it comes to maintaining a low profile.

His stories are funny, but not oh stop, oh stop, oh stop gut busters. He does things like lose sleep over whether he misspelled a name or got a fact wrong. He breaks diets and skips runs. He’s hardly Casanova. He’s just likable.

Admittedly, stories about eating disorders are all pretty much the same, whether you are Tracy Gold or Marya Hornbacher. While the male Mexican speed freak bucks the trend a bit, Bruni’s still splashing cold water on his face in a public restroom and hoping no one notices his red eyes.

And stories by food critics … well, they all wear disguises and love Asian fare.

This book is not going to change anyone’s life the way one of Bruni’s no-star ratings would. But it is a nice read about the man behind those stars.