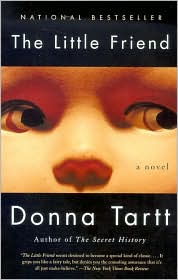 No book has ever quite disappointed me like The Little Friend.

That's not to say I didn't like it (or, at least, parts of it). It's just that the beginning and, to a lesser extent, middle of Donna Tartt's murder mystery of sorts were so good that by the time Tartt wound up her ponderously paced tale, the payoff was nowhere near what I expected.

The Little Friend centers on twelve-year-old Harriet DuFresne and how, in a fit of summer boredom, she sets out to solve the cold case of her brother Robin's death ? a crime her sleepy community of Alexandria, Mississippi still hasn't gotten over, even a decade later.

Tartt's talent for writing is apparent how she executes the Southern Gothic atmosphere. Ominous thunderclouds and bleachingly bright days complement Harriet's moods. The pall of Robin's violent death still permeates the Dufresnes' quiet house, un-articulated and indefinite, but present nonetheless. Eccentric and quirky minor characters tumble in and out of the book, infusing it each time with a fresh shot of peculiarity. In these stages, I couldn't stop reading. I wanted to envelop myself in this world, this mysterious, haunted community Tartt created.

But at about the three-quarters mark, Tartt's charm wears off. The plot slackens and can't be resuscitated. Characters' quirks and eccentricities have stayed too long and become irksome. And it becomes apparent that resolution ? a neat, satisfying conclusion to things ? is just not coming. Tartt may be a great writer, but she's got a few shortcomings in the storytelling department. The feeling that I had been tricked grew as I approached the final pages. How could such a promising start end up as this?this whimper? Where did all that potential go?

I still resent Tartt a little bit for leading me on so long, only to disappoint me. But I am still glad I readThe Little Friend. Those 200 or so first pages were better than most entire books I've read.