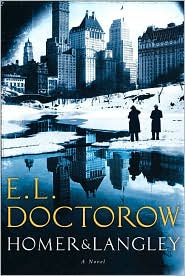 How fortuitous. E.L. Doctorow’s novel Homer & Langley was released just as hoarding has become the OCD d’jour. In this novelette, Doctorow tweaks the legend of the Collyer brothers, two New York City, right-side-of-the-park eccentrics living together in a somewhat spousal situation.

It is early in the 20th century. Their wealthy parents are as dead as Homer’s sense of sight; Langley has just returned from the war with a scratchier voice, sharper cheek bones, and is in the early stages of collecting things: first, every newspaper, everyday, then player pianos, candles, lamp shades, and figurines.

The story, told through Homer’s mellow drone and dusty humor, is for a French journalist with whom the younger Collyer has become enamored. While scenes are mostly set in the Collyer’s ever-eroding estate, history comes through the front revolving door. Before they settle into hermit life, they host dance parties. Records and a shot of a drink for a small price. There is hired help, and the hired help’s family. A young woman Homer teaches to play piano. Immigrants with a bicycle built for two and a gangster who surprises them with the kind of fruit basket that kisses back. Then there are the hippies. . .

Stuff is piled everywhere. There is a Model T in the dining room. The electricity is turned off (failure to pay), as is the phone (they don’t use it anyway). The windows are boarded up, then reopened, then shut again. Bill collectors bombard the mailbox. In his lone act of conformity, Langley pays off the mortgage on the house.

This whole story reminds me of the way you can have a kind of crappy situation. You have to, for instance, blow on your laptop four times to get it to work. You adapt. Then, all of a sudden, the four blows don’t work anymore and you have to smack the piece of crap on your knee, too. This combination of superstition and jostling work for awhile. Then you find that it only works if you aren’t sitting near anything electronic. All of a sudden, a year has passed, and you can only use your computer after blowing on it four times, whapping it across your knee, while sitting in the bathtub and wearing a hat made out of tinfoil.

While both figuratively and literally, Homer can’t see this accumulation of junk and dip into eccentricity, the spiral is obvious to the reader. The snippets of life become more and more outrageous.

This isn’t one of those books that builds up to a giant plot explosion. This is a steady stroll of a novel. This has definitely claimed a spot in my Top 10 of 2009. Probably, even, a pretty decent spot.