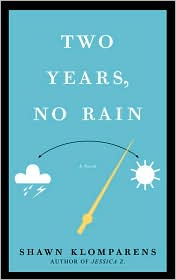 Say you’re going to write a book, and you have the writing ability to write a good one. Do you write the book that will sell 300 copies to 300 people who dog-ear it, reread it, quote it, and sleep with it under the pillow, while there is a chance that it will miss out on that “good book jackpot” and go largely ignored, or do you write a novel with a hot-pants male lead, aimed to women who got married when they were 19 years old and are now 12 years deep in a loveless marriage and look to Sandra Bullock for solace?

It’s unclear whether Shawn Klomparens actually weighed these options when he wrote Two Years, No Rain, but what he has done is the latter. The result is not chick lit, nor is it dick lit, although Klomparens seems to study from the school of Perrotta and Tropper.? It is some sort of freakish hybrid. Perhaps chick-by-a-dick lit: A story for women, by a man who seems to think he knows what women want to read. And maybe he’s right. I’ve found enough women cooing all over the internet about the protagonist Andy Dunne.

The story starts with Andy Dunne, a weatherman on satellite radio, on the day that his wife is stripping him of all of their mutual worldly goods. She’s been cheating on him with at least two of her clients. Andy is watching some young dudes load furniture into a moving truck and pouring beer into his face.

Meanwhile, he’s on year two of a debilitating crush on his married friend Hillary, who works in his building and has a hobby that includes curling up with a bottle of wine and talking to Andy on the phone late into the night when her husband isn’t home. Sighing, asking Andy what he’s wearing, hinting that she’s interested in him. In the meantime, it hasn’t rained in more than a year.

In the weeks that follow, Andy loses his job, but gains a better one as the star of a show for children. He quits drinking, he gets a trainer. Suddenly gaggles of women at strip mall sports bars are clawing at his crotch and asking for his autograph. He is also suffering with fainting episodes and unresolved guilt over his dead twin brother. Hillary’s husband asks him to lay off his wife; like a petulant child, Hillary tells her husband that she can be friends with whomever she wants; Andy and Hillary start playing footsie during their weekly lunch dates.

This chick found Andy Dunne more bland than cardboard with air-flavored frosting, and Hillary Hsing to be struggling with the wishy-washiness typically found on people who still wear braces — at least emotionally. Other problems with this novel include tedious details, repetition, and cringe-inducing sex scenes more commonly found in a pocket-sized book with Harlequin scrawled across the cover. Plus, there was the distracting fight going on in my head. Who is more loathsome: Hillary and her panting and innuendos and tortured heaving breasts, or Andy and his willingness to wait two years for a woman who can only call when her husband isn’t home.

Sometimes I wonder what the point is of reviewing books I don’t like. I don’t, like, have a goal of providing a cautionary tale. I’m not trying to stop book sales. And the things I didn’t like about this story are some of the same things that other people gobbled. I guess this book just wasn’t for me.