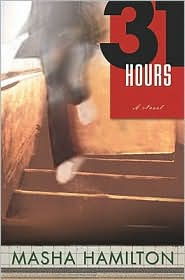 It’s 1:44 a.m. in Manhattan when Carol Meitzner wakes up with a feeling of dread. Something is definitely not right with her son Jonas. So starts Masha Hamilton’s latest novel, 31 Hours.

Every chapter starts with New York time and Mecca time. And obviously, every chapter ticks closer to the 31st hour. By the end of chapter two, only eleven pages into the book, there’s little doubt what Jonas’ intentions are. Jonas is an impressionable twenty-one year old with skewed ideologies, at least from an American standard. He snuck off to Pakistan and was recruited to be a suicide bomber. So the only questions that remain for the rest of the 218 pages are ~ will they find him in time, and/or will Jonas carry out his mission? And for a book without much action like most suspense/thillers, Hamilton pulls it off. Without giving anything away, the ending can, and certainly may, spark discussion. (I can picture this book being discussed in a classroom setting.)

Each chapter rotates points of view with either Jonas, Masoud (the man guiding Jonas), one of the many looking for Jonas, or a homeless beggar named Sonny. As mentioned above, 31 Hours is not your typical suspense/thriller. This is not a roller coaster ride, but more like a crescendo, gradually building and building until you get to the top. Hamilton masterfully sets up the tension until you, as a reader, get to the point of finishing a chapter and looking at your watch to see if you have time to fit in another. It’s like every character is a grain of sand spiraling down an hour glass. They slowly come closer and closer together until they all meet in the middle.

Masha Hamilton’s writing style flows, and what I especially enjoyed is that she’s an author that writes using all of her senses. One of her many strengths is setting a scene. As a reader I felt like I was there. I was able to smell the foods, hear the traffic, and feel the crowds jostling in the subways. And with Hamilton’s background as a foreign correspondent for the Associate Press for five years in the middle east, her Middle Eastern characters felt very real and believable (not to take away from her American characters, who were equally as believable).

For many, 31 Hours will not be an easy book to read. It mainly focuses on the inner turmoil of a mother trying to find her son, and that son, with a warped sense of values, voluntarily being denied access to everyone he loves, and then wanting to blow himself up and taking others with him. Still, Hamilton’s mastery of words will pull you in and not let you go.