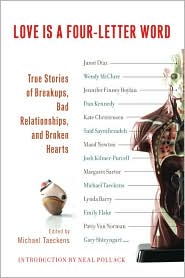 I’ve grown leery of the essay anthology after the horrible experience I had reading Things I Would Have Learned in English 101 if I Hadn’t Skipped Class to Have Sex, I mean, Things I Learned from the Women Who Dumped Me. The book was so awful and cliched that I feared I had be scarred for life.

Then I kept reading about Love is a Four-Letter Word, subtitled True Stories of Breakups, Bad Relationships, and Broken Hearts, edited by Michael Taeckens. It worried me and then I saw that the introduction was by Neal Pollack, and made me even more worried. But ultimately I was won over by the author list — Junot Diaz, Kate Christensen, Dan Kennedy, and Said Saytafiezadeh.

Thank god I put my fears aside and dove in. This was fun.

When writing about love and heartbreak there’s a tendency to the maudlin, to the woe-is-me, to the “this is the worst thing to ever happened.” But there wasn’t a lot of that in this anthology. Instead most of the artists approached their heartbreaks from an area of remove, with wizened eyes because they knew they had survived. As a reader, I really appreciated it. As a writer, I think it was quite brave. It’s hard to admit our romantic failures and the stupid, stupid things we do for love, even though we all do it.

What surprised me the most about this collection is that the writers who drew me to it were, kind of disappointing. Instead I discovered brand-new writers — Maud Newton, Jami Attenberg, Jennifer Finney Boylan, Amanda Stern, Margaret Sartor– who charmed me, made me eager to seek out their other work.

I especially liked Jami Attenberg’s essay “The Story You Will Tell” for purely egotistical reasons. See:

He doesn’t call or e-mail. But it’s okay. You are already turning it into a story in your head, that time I made out with my ex-boyfriend. Because this is what you do, you turn things into stories, and then it’s okay. You don’t need to be in a relationship. You are already in a relationship with yourself. You are going to love yourself forever. It is a little bit sick, but it is a little bit healthy too. And you never not call. (pg 179)

The same can probably be said about Michael Taeckens’ piece (incidentally, he chose The Smiths in the Largehearted Boy Book Notes essay by the authors included in this book).

I had been confusing beauty and sadness for a long time, apparently. My belief that that they were intertwined was like a double helix in my genetic code. And perhaps the sadness and beauty were mixed up with the masochism too. Emily Dickinson was my favorite poet. (Funerals! Flies buzzing!) Ingmar Bergman was my favorite film director. (Death! Schizophrenia!) The Smiths was my favorite band. (You don’t even know I exist, but I love you!) Even as early as age fourteen, my predilection for the maudlin made itself known — the theme song I chose for my relationship with my girlfriend was Chicago’s “Hard to Say I’m Sorry/Get Away”: Even lovers need a holiday far away from each other. The song just seemed so romantic. (pg 130)

The collection is so overwhelmingly solid that I won’t mention the big, dull duds (*cough*Gary Shteyngart*cough*), and just give it a hearty recommendation.

Leave a Reply to Will Cancel reply